ADDRESS BY HIS BEATITUDE THE ARCHBISHOP OF CYPRUS CHRYSOSTOMOS 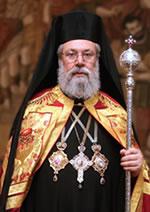 This is a happy and glorious day for Cyprus and its Church, dear friends, fathers and brethren. We have the singular honour of having among us so many distinguished personalities, Christians, Muslims, Jews, Hindus and Buddhists. We welcome you all with our warmest greetings. We express our joy for the fact that this international meeting for peace is taking place on our island and we hope that useful and beneficial results will ensue.

With the emotion and memories of last year’s meeting in Naples still alive in our minds, our thanks go particularly to the community of St Egidio for the opportunity it has given us to co-organise this meeting in a country which has been deprived of peace for so many centuries, among a people that is peaceful by nature, who even today is struggling for the benefits of peace, in a region where the cries of war have never ceased.

Peace is indeed the most longed-for virtue. If war is the greatest barbarity and most terrible crime, peace is the source of all joy and happiness. Only the mentally imbalanced would choose war over peace. The consequences of war do not lie only in physical destruction. Its even greater evils include moral degradation and the abasement of the higher values and leads to people hating each other and seeking retribution, even after the war is over.

In the present era where the culture of technology with its nuclear and chemical weapons is threatening mankind with extinction, the need to establish world peace has never been as important as it is now. Man, as a reasonable being, ought to choose peace and pursue it by every means at his disposal. And yet, his multiple passions often lead him into wars that deprive him of peace and of the possibility to develop spiritually and materially. Moreover, all people do not have the same understanding of the concept of peace. Some people introduce subjective criteria into it, thereby distorting its meaning.

However, for us, the representatives of the various religions and cultures, peace should be founded on justice, and should safeguard the freedom of individuals and peoples. The ancient Greeks considered peace the daughter of Justice and the sister of Eunomy, and in this way perceived it in the true and correct way.

In a world so full of contradictions, in the labyrinth of the pluralism of ideologies, religions and cultures, if we wish our conference to have some content and practical results, we must seek a criterion of undisputed value on which to base this sought-after gift.

We are convinced that such a criterion, which is a pre-condition for the achievement of true peace, should be the protection and respect for human rights. These rights are indissolubly linked to freedom, justice, and equality, and must therefore be the basic components of peace. It is indicative that in the UN Charter, which, albeit in theory, safeguarded human rights after the tragedy of World War II, the word peace is encountered 39 times.

In practice, however, we have the disappointing contradiction between the declarations of human rights and the practice of a number of nations, or individuals. States flagrantly violate the rights of certain groups of their citizens, and appear before the UN as champions of peace and human rights. And individuals who purport to be democrats pitilessly oppress those under their command.

There are certain trends nowadays that erode even the value-content of human rights and do away with the possibility of their being used effectively towards peace. Thus, all too often the satisfaction of individual needs and pursuits is described as a human right. In other words, human rights are correlated to the rights of modern consumers and this degrades the efforts of those who have fought for freedom, equality, dignity and fraternity. Thus, peace – which is the goal of human rights - is degraded and takes on a character resembling eudemonism.

Peace, to which human rights ultimately look, and towards which we, as representatives of religions and cultures aim, means the foundation of a law-based order, in which the freedom of the one can co-exist with the freedom of all the rest. And this goal must not be lost in the face of aspirations that link peace to the material prosperity of the individual.

We repeat that we consider respect for human rights a pre-condition for the achievement of peace. But human dignity must be the essential point of reference for these human rights.

Peace is a universal value and the attainment of its true content is the ultimate objective of any religion. If some fail to achieve it, these are individual people or nations that are influenced by baser values and ideals, and not the religions or cultures which seek perfection and prioritise their values correctly. All religions accept that peace and war are born in the hearts of men, because the heart – in the non-religious sense of the word – is the core of the human being, the place where bonds with other people are created. Peace is born in the heart of people who are reconciled with God, who are cleansed of all passions and pettiness. We trust that this will be demonstrated through the speeches, discussions and interventions during these three days.

In Christianity, the source of all the meanings of the notion of peace is God. Peace sums up the entire eschatological vision of the theosis of humanity. Peace is the natural state of things before God. The opposite of peace is disorder: For God is not the author of confusion, but of God, as St Paul tells us (I Corinthians, 14, 33)

Christ as the Lord of peace, brings reconciliation between sinful humanity and God, it unites those in conflict with each other and becomes peace among us (Eph. 2, 14). Indeed he blesses the peacemakers.

It is a fact that Jesus did not promise his disciples just any peace, but His peace. “Peace I leave with you, my peace I give unto you” (John, 14, 27). This peace is conquered; it is the fruit of the “new creation” in Christ (II Corinthians 5, 17). St Paul speaks clearly on this issue: “But the fruit of the spirit is peace and mercy” (Galatians. 5, 22). That is to say, all those who follow this particular course will have God’s peace and mercy. And for those who turn their backs on the will of God, the Scriptures say: there shall be hardship in their paths and they shall know no peace (Psalms 13. 3).

Of course, the peace to which individuals - even Christian peoples - usually refer is a counterfeit effigy of true Christian peace. They want to impose their own will on each other, they are indifferent to humanitarian values and promote only their own interests. But selfishness cannot be the foundation of true peace. And the violation of God’s law is the main cause of the absence of peace. We are certain that all the other religions have a similar infrastructure for peace. Religion is the highest spiritual manifestation of the life of man and can serve only the cause of peace, far from self-interests and relative values.

And if the many peace-making efforts and campaigns have not borne fruit and humanity has always lived under the threat of a new catastrophic war, in addition to all the local conflicts, it is because subjective interests and criteria enter into such efforts. Thus, we experience the peace of terror and of unjust compromise.

A tangible example of this is Cyprus. An unjust war waged by a country of 70 million – 100 times bigger than us – placed 40% of our country under its occupation. Since then we have had no war. Indeed, Turkey has called its bloody intervention a “peace-keeping operation”. The results of this “peace” are: 200 thousand refugees (40% of the population), who have not been permitted to remain in their homes, even under occupation. Six thousand dead and two thousand missing. Settlement of the occupied parts with 200,000 settlers from Anatolia. Plundering and destruction of more than 500 of our churches – part of Europe’s cultural heritage. Seizure of our properties. A ban on free movement, settlement, acquisition of property in the occupied parts of our island. And the reason for all this is the desire of Ankara for conquests. The difference of religion has nothing to do with it. For years we lived in peace and love with our Turkish-Cypriot compatriots. And we are certain that we can do so now. The President of the Republic is making enormous efforts to find a solution that we can live with, but so far there has been no response from the occupying regime.

We do not wish it to be thought that we are exploiting your presence here in order to propagate our cause. But how can we keep silent when as hosts we are not able to take you to visit the most important parts of our island? The tomb of St Barnabas, the founder of our Church, the Monastery of St Andrew, the Apostle, to Kyrenia, Famagusta, Morphou. We will leave you to judge the situation by yourselves. All we ask you, in the name of our people, is to help as much as you are able to establish true peace in Cyprus by the restoration of justice and freedom on the island.

We repeat that peace can only come about if human rights – which everyone purports to uphold - are respected in practice, for our country also. We welcome you all once again and wish you success in your proceedings and a pleasant stay in Cyprus.