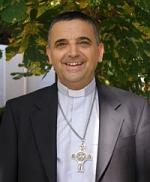 Dominique Lebrun (born 10 January 1957) is a French Roman Catholic prelate. Bishop of Saint-Étienne from 2006 to 2015, he was appointed Archbishop of Rouen and Primate of Normandy in July 2015.

Dominique Julien Claude Marie Lebrun was born in Rouen to Auguste Lebrun, magistrate and Geneviève (née Facque) Lebrun, the last of a family of eight. He spent his early years in Rouen, before his family moved to Villemomble, a town near Paris. Interestingly enough, he was the son of a nun; his mother entered religion after she was widowed, and once her children had completed their curriculums. She took the religious name of Geneviève Marie. Dominique Lebrun served as an official football referee for 13 years.

He studied at Panthéon-Assas University, where he obtained a master's degree in civil law. In 1978, he entered the French seminary in Rome, then went on to study at the Catholic University of Paris. He supported his PhD thesis in theological science in 1990.

He then became spiritual director at the French seminary in Rome until 2001, when he was sent back to the Diocese of Saint-Denis. He was responsible for the continuous training of new priests in the diocese, and was in charge of building connections with the economic and professional sectors in the Plaine-Saint-Denis. He officiated at the Church of Sainte-Geneviève de la Plaine in Saint-Denis. In 2003, he was appointed priest of the Basilica of Saint-Denis, and of the parishes around the city, and was named member of the Presbyterial Council.

From 1994 to 1997, he served as editor in chief of La Maison-Dieu, a pastoral and liturgical magazine of the Dominican Order, for which he kept writing articles occasionally until 2002.

Appointed Bishop of Saint-Étienne on 28 June 2006, he was consecrated on 9 September of the same year by Cardinal Philippe Barbarin.

On 10 July 2015, he was appointed Archbishop of Rouen by Pope Francis. His installation took place on 11 October 2015 at Rouen Cathedral.

The new bells of the restored carillon of Rouen Cathedral, cast by Paccard, were christened on 3 April 2016 by Monseigneur Lebrun.
[September 2016]
Source: Wikipedia