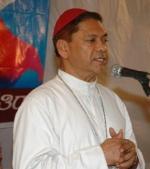 The Community of Sant’Egidio has kept alive the “spirit” of the Day of Prayer and Fast for Peace for the last thirty years. This initiative came from St John Paul II who declared that “all men and women in this world have a common nature, a common origin and a common destiny” (Assisi, 27 October 1986). The gift of life and the gift of peace go hand in hand. They cannot be separated, for one is sustained, protected, enabled to grow and find fulfilment by the other.

Although the understanding and teaching about the value of life is not exactly the same in all religious traditions, which are present in different countries of the Asian continent, life is considered sacred by all believers of all religious traditions. According to Asian religious psyche the human person has a special place in the universe. Human birth is considered a mystery which no amount of rationalization can explain or explain away.

Therefore, the mystery of life, from the moment of conception onward through the stages after the birth of a child, is attended by prayers and ritual actions. Human birth is both a part and also the culmination of the cosmic birth of all living things. The mother who bears the child is just like mother Earth who patiently carries all beings.

The world of human persons does not consist simply in what they do, but in what they enjoy, that is, in everything that contributes toward a harmonious, civilized, and happy life. Asian people have a deep sense of the divine which is expressed in many and varied ways in their respective religious texts, teachings and rituals. Divine providence is more than just a benign surveillance; it is fundamentally a directing of the growth of all creatures, each according to its nature.

I wish to touch upon some points of common concern with regard to value of life in Asia and what believers of various religious traditions can do individually and together. The first is concern is about women, in general, who are still to get their God-given dignity in most Asian cultures. The discrimination against and exploitation of women in some extremely patriarchal Asian societies is a scandalous reality. The thousands of female foetuses aborted yearly and the practice of girl-brides indicate the extent of women’s subservient situation.

Unfortunately, in some Asian countries, due to extreme poverty child labour is practised openly. Children, who should be in school, are found doing mean and servile jobs, in inhuman conditions, in fields, factories and homes. The evils of human trafficking, the lure of the sex industry for children, youth and adults, the willingness of many to be involved in child pornography are mainly due to poverty and deprivation. The most affected victims of war are children, traumatized by evacuations, and the roar of weapons. They grow up as “children of war,” their growth and development seriously interrupted. Many are even recruited forcibly as “child soldiers.”

The varieties of races, ethnicities and cultures in Asia from Central Asia through South and East Asia and down to Southeast Asia, from the plains to the mountains, should be a great source of pride and joy. They are a rich mosaic of the human tapestry that God our Creator has gifted Asia. But harmony and peace do not always reign. Violent clashes of culture and ethnicity, often with religious and political overtones, dot the Asian landscape. In some parts of South Asia and Southeast Asia, Christian families have fled their homes for safety, literally driven away by religious bigots and radicals. Families have been massacred. Places of worship have been razed to the ground. Believers of different religious traditions live in fear, in anxiety and insecurity, under the sword of fundamentalist ideology that does not welcome religious pluralism. Sadly we see an increasing level of aggressive and militant religious intolerance in many Asian countries.

While there are certainly regional economic differences, pervasive, massive and abject poverty is the condition of millions of families, particularly in South Asia and Southeast Asia. The negative effects of economic globalization on poor families that cannot compete fairly against the rich and more powerful in a regime of free liberalized markets cannot be overestimated. Unable to access the sources and benefits of economic development that flow directly to the upper levels of Asian societies, poor families are of necessity drawn to seek a better future in urbanized centres in their own countries or serve as migrant workers in more developed countries as in Singapore, Thailand, Malaysia and in the East Asian region, and especially in the Middle East.

Such internal and external migration of family members is often to the social detriment of the families left behind. Conjugal bonds and family relationships are broken by prolonged absences. Children grow up without the guidance of both parents. Love cannot be expressed by remittances sent to support families.

Moreover, many migrant workers suffer inhumane treatment and the phenomenon has been called a “new slavery.” Their dislocation often results in the break-down of families and the dysfunctional growth and development of children.

Sometimes the drive for a better quality of life begets a craving for higher life styles and for luxury goods and results in a narrow utilitarian one-child view of family. Further, the materialistic and consumeristic self-fulfilment view of husband and wife in pursuit of their respective careers weakens conjugal bonding and, aside from the economic motive, convinces the spouses that only one child is the ideal. Their procreative gift from God is lost in careerism and economic ambition.

Of far reaching implications is the situation of families affected by internal armed conflicts, such as wars, political rebellions, terrorism and violent cultural, ethnic, and religious clashes. Such violence and conflicts result in temporary or permanent dislocation, internal and external migration of thousands of families to safer areas, regions or countries. They exacerbate biases and prejudices that are constant sources of division and conflict.

The creeping emergent global culture of postmodern secularism negatively impacts pro-life values in many Asian countries. It weakens religious belief, as it already did in many developed countries in the northern hemisphere. In some countries the drive for higher standards of living results in less respect for the elderly and the disabled as they are considered burdens to the family and society. Consumerism replaces religious values in Asia such as simplicity. In the language of Pope Francis, we are seeing the emergence of a “throw away” culture.

The digital revolution is also weakening bonds between people. It is not unusual to see members of the same family gather together, but each one busy with the mobile phone, texting messages to friends. Mobile phones and I-pads dominate human values of respect for each other. Individualism is luring the youth away from the value of common good.

The religions in Asia are a great force and inspiration for people. Instead of working in isolation to face some of the challenges I have just enumerated I most earnestly propose that believers of different religions come together, meet one another and reflect/plan methodically on what each religious community can individually do and what all together can do in order to remedy the precarious situation in a given place. Most of the religions present in the continent were born in Asia and thus the believers of different religious traditions are rooted in an age-old religious ethos. To be religious is something natural to Asians. Facing these challenges inter-religiously, not only will enrich life of each Asian, but Asia will be a leading light for the rest of the world.