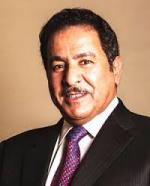 It is an honor to take part in this panel of peacemakers who commit their lives to ending conflicts. And I must say that I am inspired by their example.
I would like to take this opportunity to raise my voice in this prominent company to denounce any violence committed in the name of religion. Terrorism is a vile crime. Its purpose is to make fear permanent, and drives neighbors apart. It views strangers as threats. It is a virus that attacks the good in each of our societies. Such acts are of course condemned by all religions.
All religions cherish the same values of empathy, mercy, charity and love for the other. If only the world knew that simple truth. In fact, too many people are being misled. Extremists claim that religious teachings can justify violence. That is fraud. That is a lie. That is manipulation. And that manipulation influences the perceptions of millions of people.
How can we foster cooperation and prevent extremism and exclusion?
The World Prayer for Peace is a shining example of how to build trust, hope and a common vision of the future.
To achieve that vision, I feel we must be united against those who try to justify violence in the name of religion.
For just a moment, I wish to recall that today’s extremist violence has deep roots. Those roots have often grown in places that suffer conflict. When military might smashes peaceful coexistence, and when armed groups profit from theft and oppression, extremism grows.
Extremism in many parts of the world is the child of military adventures and conflict that had begun before the very first World Prayer for Peace which was convened here in Assisi, 30 years ago.
Sadly, military force has brought no long-lasting solutions, or trust, or cooperation among religious communities.  Instead, it brought poverty and hate. Terrorism and armed conflicts rob citizens of the culture of coexistence they have known, sometimes for centuries.
Extremism also breeds extremism. For instance, in Europe and North America, we are witnessing the return of an ideology that justifies scapegoating and encourages fear and hate. Xenophobia is gaining strength. Some researchers compare the today’s culture of hate to the 1930s.
History tells us we must act quickly.When our societies are hit by extremist violence and by terrorism, more and more people demand we close our societies. These calls to create walls occur especially when terror is committed in the name of religion.
Violent extremism can be prevented. But we should resist the demand to build walls. Because that is what the extremists want to happen. Soon after the first World Prayer for Peace, Europe began to remove walls. The Berlin Wall fell. Europe gave the world great hope. How did Europe manage to defeat the fear? How did Europe dare to allow millions of people to migrate, travel, and exchange ideas?
The walls fell because many, many people invested in dialogue over many decades. Today, new Walls of Fear are rising. And those Walls of Fear can be removed, if we have faith in the power of dialogue.
Dialogue helps us understand complex issues, and know their causes and consequences. It is a discipline, to think without walls.
Through dialogue, people can safely learn to face their fears and the fears of others. When we know each other, we are more likely to trust each other. A little trust can help us accept each other’s differences. Acceptance will help us restore the culture of coexistence. Many fear others’ religions. That is why we need interreligious dialogue.
The international organization I represent here today, is dedicated to promoting interreligious dialogue. Prominent religious figures govern our work. They come from three Christian denominations, Orthodox Judaism, schools of Buddhism and Hinduism, as well as Sunni and Shia Islam.
We work to unite religious leaders and policymakers to promote the values of peace, respect, and end violence in the name of religion. Religious leaders have unique skills that policy makers need to build community resistance against the virus of extremism.
In November 2014, we convened religious leaders from the Middle East. It was an inclusive group representing Christians, Muslims, Yazidis and other religions of the region. We gathered to unite against violence in the name of religion. These leaders called upon us to confront terrorism and the ideology of hate, and to foster the culture of dialogue among the young and in religious education.
They asked us to train young religious leaders to effectively use social media to advocate pluralism as an alternative to hate speech. We developed a training curriculum and began training in the region last year.
Earlier this month we held our first training program in Iraq. Young people from every Iraqi province representing six religious communities met in an environment of peace and cooperation in Erbil. They all have suffered from violent extremism, but their thirst for peace was stronger than any fear of the other.
We also support the use of interreligious dialogue in religious education through the International Fellows Programme. The Fellows are Buddhist, Christian, Hindu, Muslim and Jewish religious teachers. They go through an intensive training program together for a year. With this training, they help their institutions adopt and use dialogue in their curriculum.
Next month, we will launch the Arab World’s first network of religious educators. The network links 16 Christian and Muslim religious education institutions to strengthen a culture of cooperation between religious educators  in the Arab world.
These are our first steps on a long journey. I am sure that when we walk together, we will go far, especially when we have faith in the power of dialogue.
Thank you