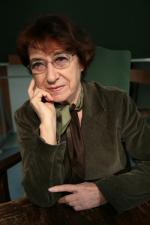 My school of peace was the War. World War II took away five years of my childhood. For all f those five years, I was dreaming about the end of the war and craving for peace.

Before the war came to us with exploding bombs, children had been playing war games in streets and yards. I remember some of them exclaiming: “Oh, I want the real war to come soon!” These words echoed in my memory as a curse. After only a few days of real war, when I had seen falling and burning houses, and torn dead bodies lying around me, and I had realized that with the work of a few moments, such bloody pieces of flesh could have been the only thing remaining of me, I learned that war is not a game but a problem of life or death, of survival.

[I survived because I was taken to the International children house in Ivanovo, Russia. Since 1933 this house has sheltered children from 70 countries that have experienced the horrors of war: hunger, freezing cold and burning heat without a shelter, loosing their nearest and dearest, parents, relatives and friends. We survived because we learnt how to cooperate and work together, how to create a new community of friends and build solidarity – even among those who came from countries that were fighting against each other. Now, every year, those who spent part of their life in that school are reunited in various countries (in the last 10 years they have met in Austria, Bulgaria, China, Ecuador, Germany Greece, Hungary, Poland, Russia, Sweden) to recall and share memories of their childhoods in wartimes, and to discuss how to preserve the peaceful existence for their children. ]

The school of peace begins with recalling and sharing negative experiences of wars, describing the suffering, atrocities, and horrors. The importance of this first course was clearly evidenced during the World Youth Day in Poland, when the Holy Father Pope Francis was giving voice to young people from across the world to speak about their memories of war.

The tasks of peace education is to warn people about the dangers of various forms of violence, such as ecocide, genocide, modern warfare, ethnic hatred, racism, sexual abuse, and domestic violence, as well as to advise people on paths to peace and reducing the threats of interpersonal and environmental violence.

The research on peace and conflict studies suggests two different approaches. The first is the so-called ‘negative’ sense of peace. It refers to the cessation of war or the absence of violence. The second type, ‘positive’ peace, identifies the conditions that eliminate the causes of wars and violence, enabling people to resolve their conflicts without the use of physical coercion and to cooperate in order to improve the quality of their lives.

According to Johan Galtung: “the best way to define peace is to define violence, its antithesis”.  John Schwartzmantel writes: “Violence can be defined simply as the use of physical force to achieve one’s ends. In that sense violent action abandons any attempt to convince others through the force of the better argument, or through appeals to authority. Instead it operates through fear - fear of physical harm being inflicted on those who do not comply with the demands of those using violent means”.

The ‘negative’ approach includes studies of the causes of war and reasons for violent fights, hostility and hatred. It shows that the justification of protracted warfare as resulting from a need for revenge, and the punitive restorative justice, or ‘pre-emptive self-defense’ - preventing an enemy’s attack, can lead to the escalation of violence. It involves revealing the economic, political, social, psychological, and ecological costs of wars, and the destruction they bring to all humanity and to the planet. As Umberto Eco emphasized in his “Reflections on War”: “No matter how the war goes, … it will drag on in the form of a dramatic political, economic, and psychological instability for decades to come, (…)” “War cannot be justified, because – in terms of the rights of the species – it is worse than a crime. It is a waste”.

The question then arises: why do certain people, individuals, groups, and nations have recourse to violence, and refuse to accept a peaceful approach to conflicts resolution and the politics of debates, negotiations and compromise? Looking for an answer to this question, we should recall the message of His Holiness Pope Francis, who has condemned “… justifying deplorable economic policies which breed injustice, division and violence for the sake of ensuring the wellbeing of individuals or nations. Not infrequently, economic and political projects aim at securing or maintaining power and wealth, even at the cost of trampling on the basic rights and needs of others. When people witness the denial of their elementary rights, such as the right to food, water, health care or employment, they are tempted to obtain them by force”  .  Thus, in some cases people resort to violence as a response to increasing inequality, exclusion and lack of recognition, perceived injustice and corruption of the rulers, and as a protest against ethnic oppression.

The study of positive peace is a search for the peaceful, non-violent resolution of conflicts. However, most of these studies have abandoned the attempt to create a single and all-encompassing definition of peace and instead adopted the idea of a multiplicity of its meanings. Some scholars focus on the economic, political, and social conditions that eliminate poverty, inequality, discrimination, marginalization, and social oppression while ensuring social justice, welfare, human rights, and social stability through the creation of a community of equal citizens among whom dialogue is possible. Others explore ways of developing collaborative and supportive relationships between individuals, groups, and nations that would foster mutual understanding, respect for different identities, and a sense of commitment to the public interest.  Research on positive peace describes peaceful societies where there is very little external warfare or internal violence, where conflicts are resolved without aggressiveness, and where harmony, gentleness, and kindness toward others are successfully promoted.

Various religious beliefs profess different meanings of peace. At a school of peace students should be taught prayers for peace in their own languages, but should learn also understanding that peace is the common good of all human kind. On the World Day of Peace in 2002, Pope John Paul II prayed “that the truth of this affirmation – No peace without justice, no justice without forgiveness – be engraved on every heart. Thus the human family will be able to find the true peace, that flows from the union of justice and mercy” . In his Message for the World Day of Peace in 2016, Pope Francis has developed this idea in the words: “Peace: the fruit of a culture of solidarity, mercy and compassion”.