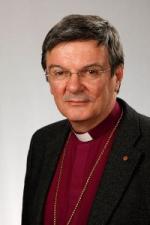 What kind of background am I coming from? My country Finland is one of the Nordic countries, where the Lutheran approach to the Christian faith has had a particularly deep impact on our societies. At the year 2000 more than 90% of Finns were members of the Finnish Evangelical Lutheran Church. Right now, slightly fewer than three out of four still are. Immigration is only a very minor factor in de-churching and secularization.

My country differs from other Nordic countries especially in that we speak a completely different language. Swedes, Danes, and Norwegians can all understand each other even if everyone is using their native language; Finnish, however, is not only not closely related, it is not even Indo-European. Also, taking a look at the map of Europe quickly tells you that for the majority of Europeans, Finland is beyond the sea. It is easy to reach the conclusion that Finland has for an exceptionally long time remained an unusually monochrome country, one where Lutheran Christians speak a language understood by no-one else.

However, Finnish society is changing rapidly. Religious indifference and negative attitudes towards religion are waxing—in this, Finland is simply following an established “Western” trend. And as Finland is a wealthy, free, and stable society—according to some, perhaps even the most stable in the whole world—Finland is attracting growing numbers of asylum seekers, and a substantial number of them are Muslims. For a certain period during last autumn, Finland had more asylum seekers per citizen than any other state in Europe.

Reactions to this have been not unlike those seen in other European countries. On the one hand, religious communities have spoken in defense of loving one’s neighbours and of the equal worth of all human beings. Since the resources of my own Church are sufficient for it, we have been able to offer help and make buildings available, working together with state and municipal as well as third-sector actors. On the other hand, social media in particular are teeming with hate speech. Immigrants are perceived as a threat—to jobs and to Finnish culture. And who says “culture”, says “religion” as well.

Last week, in an article in the Finnish daily Helsingin Sanomat, Nordea Bank Group Chief Executive Officer Casper von Koskull had this to say about the effects of globalization on society: “In a country like Finland it is likely that income inequality will grow to some extent, but it is very important that this growth can be justified to the populace. If this is not the case, answers will be sought in religion or nationalism. Democracy and liberal market economy will then end up being the losers.”

This may be a gross simplification, but it seems that von Koskull is of the opinion that a Westerner must have enough material goods and economic well-being—otherwise the Westerner will go both religious and undemocratic. I find it likely that what von Koskull is really thinking about is a particular kind of religion—mentioning “nationalism” in the same context is suggestive. For those of us who represent “religion” this is of course a challenge: is this the inevitable role of religion? To feed xenophobia and regressive nostalgia? To build sub-identities for people who are thus pushed further and further away from each other into mutual alienation?

One ”Western” answer is French-style laïcité, where society seeks to contain religion by squeezing it away from the public sphere. This model is a child of the 20th century; it is also inappropriate and discriminating. It limits freedom of religion, for after all it is characteristic of religions—it is of their very essence—that they are practiced in a public and communal manner. The recent bans on burkini imposed by certain French cities are a glaring example of how a laïcité-based uniformitarian monochrome culture manifestly fails to solve the problems of living together in a globalized world.

I am the vice-Chair of the Finnish National Council of Religions. As a body, we have emphasized the importance of realizing that multiculturalism necessitates noticing and acknowledging the fact of multireligiosity.

Religion is a fundamental part of a person’s identity; it is an entire life-form; it is practised publicly and communally—all this makes religion also a foundational factor for cultural cohesion. Peaceful and orderly life in society is always at risk if or when a member of any group—religious or otherwise—feels that because of his or her identity she or he is deprived of certain rights or not given equal chances of living a good life. This kind of experience is constantly created by a changing world: economic depression, toxic environment, global or local redistribution of wealth, resources and power…

“Living together in the 21st century” will not be easy. Globalization has so suddenly pushed us so close to one another. It is my faith, however, that we can make it, if the diversity of people’s fundamental identities can be respected; if solutions can be sought through contact and encounter rather than through limiting or forbidding identities or excluding plurality. In facilitating these contacts and encounters religions are irreplaceable.