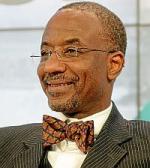 Emir Muhammadu Sanusi II (born: Sanusi Lamido Sanusi) was born into the Fulani Torodbe (Sullubawa) clan of Kano on 31 July 1961. He was crowned 8 June 2014 as the Emir of Kano, succeeding his late grand uncle Dr Ado Bayero (who died on Friday 6 June 2014). Malam Sanusi was a successful banker and was a former Governor of the Central Bank of Nigeria. He was appointed on 3 June 2009 for a five-year term, but was suspended from office by President Goodluck Jonathan on 20 February 2014 after exposing a $20 billion fraud committed by the president's associates in the Nigerian National Petroleum Corporation (NNPC) during the president's regime. Malam Sanusi is the grandson of Muhammadu Sunusi (The 11th Fulani Emir of Kano ) He was a career banker and ranking Fulani nobleman, and also serves as a respected Islamic scholar. The global financial intelligence magazine, The Banker, published by the Financial Times, conferred on Sanusi two awards, the global award for Central Bank Governor of the Year, as well as for Central Bank Governor of the Year for Africa. The TIME magazine also listed Sanusi in its TIMES 100 list of Most Influential People of 2011 In 2013, Sanusi was also awarded a Special GIFA award at the third Global Islamic Finance Awards held in Dubai, for his advocacy role in promoting Islamic banking and finance in Nigeria during his stint as Governor of the Central Bank of Nigeria.In 2015, Emir Muhammadu Sanusi II was awarded Global Leadership in Islamic Finance Award 2015 by Global Islamic Finance Awards (GIFA) to become the fifth GIFA Laureate, following Tun Abdullah Badawi (2011), HRH Sultan Nazrin Shah (2012), Shaukat Aziz (2013) and Nurrsultan Nazarbayev (2014). Emir Muhammadu Sanusi II was born as Sanusi Lamido Sanusi (Mallam Sanusi Lamido Sanusi) into the Fulani Torobe (Sullubawa) clan of Kano on the July 31 1961. He is the grandson of Sir Muhammadu Sunusi, the 11th Emir of Kano, from the Sullubawa clan of the Torobe Fulani. He is the direct son of Muhammad Lamido Sanusi, a career diplomat and technocrat that served as the Nigerian Ambassador to Belgium, China and Canada, who later served as the Permanent Secretary of Federal Ministry of Foreign Affairs.

Educational Background.
Sanusi had his primary education at the St. Anne’s Catholic Primary School, Kakuri, Kaduna between the years 1967-1972, where he obtained his First School Leaving Certificate. Lamido Sanusi had his secondary education at King's College Lagos, where he graduated in 1977. He got admission into Ahmadu Bello University (ABU) Zaria, where he obtained a Bachelors degree in Economics in 1981. He furthered his studies and obtained a Masters degree in Economics at Ahmadu Bello University in 1983, and became an instructor there from 1983 until 1985. Sanusi also studied in the International University of Africa, Khartoum, Sudan, where he obtained a degree in Islamic Law. Sanusi was posted to Gongola State (now Adamawa and Taraba States) where he did his National Youth Service Corpse (NYSC) mandatory service.

Career.
In 1985 Sanusi got employed by the Icon Limited (Merchant Bankers), a subsidiary of Morgan Guaranty Trust Bank of New York United States, and Baring Brothers of London. He later joined the United Bank for Africa in 1997, working at the bank’s Credit and Risk Management Division, he rose to the position of a General Manager. In September 2005, he became one of the Board members of First Bank of Nigeria as an Executive Director in charge of Risk and Management Control. Later he was appointed Group Managing Director (CEO) in January 2009. Almost at the same period, Sanusi was also the Chairman, Kakawa Discount House, where he sat on the Board of FBN Bank (UK) Limited.

Sanusi was the first person from the northern Nigeria to be appointed CEO in the history of First Bank in Nigeria.

On June 1, 2009, during the regime of President Umaru Musa Yar'Adua, Sanusi was nominated as Governor of the Central Bank of Nigeria and his appointment was confirmed by the Nigerian Senate on June 3, 2009 at the height of the a global financial crisis.

Emir of Kano.
On June 8, 2014, Sanusi was selected to succeed his great uncle Ado Bayero as the Emir of Kano. Many people had expected Ado Bayero's son to succeed him as Emir, this led the supporters of Bayero's son to angrily protest Sanusi's appointment. On june 9, 2014, he was formally crowned as Emir Muhammadu Sunusi II, making him the 14th Emir of Kano and the leader of the Tijaniyya Sufi order, a position that is historically the second most important Muslim position in Nigeria after the Sultan of Sokoto who is the leader of the Qadiriyya sufi order. Sanusi Lamido Sanusi is married to Hajia Sadiya, the daughter of his uncle and the late Emir Ado Bayero (Sanusi’s predecessor) and Hajia Maryam and they have a total of eight children.
[September 2016]
Source: Wikipedia