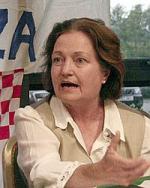 ‘WAR IS ILLEGAL AND IMMORAL, IT HAS TO END AND IT CAN BE ENDED’

I am happy to be here at this International Meeting and I would like to thank our hosts, for their  invitation to attend.   I have always been inspired by the lives of St. Francis and St. Clare, whom I believe are Icons of Christian Gospel Peace and Nonviolence.  Francis the man of action, steeped in empathy and love for all, and Clare a woman of prayer, whose love of God led her into the depth of mysticism and peace.

Francis and Clare lived in a time of violence and war, yet they choose to live the nonkilling/ nonviolence of Jesus.  Francis as a youth fighting in his local military, knew well how to wield a sword, yet he choose to follow the command of Jesus to Peter, when he told him to put up his sword and healed the Soldier’s ear.  He left the military to live in poverty and service, and together with Clare, and his followers refused to take up arms.  Francis and Clare, in the midst of much Feudal violence, choose to follow the Christian nonviolence manifesto ‘the Sermon on the Mount’.

For many people in Europe and the world, challenged by growing violence and injustice, the lives of these two great 13th century Saints gives us hope and inspiration.

Pope Francis, following in the steps of  St. Francis, gives us all hope as he challenges us to work for the abolition of the death penalty, ending poverty,  the arms race, nuclear weapons, and environmental destruction,  etc.,   However, I believe we need a clear renunciation of the ‘just war’ theory (a phoney piece of morality in the words of the late Fr. John L. McKenzie) and I add my voice to those appealing  to Pope Francis for an Encyclical on Peace and Nonviolence, calling Christians to rejection militarism and war and to follow a  Peace theology in keeping with the teachings of the Nonviolent Jesus.   This would give great Spiritual leadership not only to Europe but to Humanity.

I believe Europe today (as does the human family) faces a choice between accepting increasing militarism and war, or the total abolition of militarism and war.  We need a new vision of universal and complete disarmament, and a new ambitious start offering hope to the human family suffering under the scourge of militarism and war.  Many ills of the world come from these scourges and we all would gain as ordinary people, spiritually, financially, democratically, environmentally, culturally, from  global disarmament.   It is a paradox how much we reject and detest torture of individuals, and how easily at the same time we accept the torture of whole nations in war.

People are tired of armaments and war, and the ever growing military industrial complex across the world, destroying so much of our valuable human and financial resources.    They have seen that they release uncontrollable forces of tribalism and nationalism.  These are dangerous and murderous forms of identity and above which we need to take steps to transcend, lest we unleash further dreadful violence upon the world.  To do this, we need to acknowledge that our common humanity and human dignity is more important than our different traditions.   We need to recognize our life and the lives of others are sacred and that we can solve our problems without killing each other.  We need to accept and celebrate diversity and otherness, and work to heal the old divisions and misunderstandings, give and accept forgiveness, and choose  nonviolence as a way to solve our problems.  So too as we choose nonkilling and nonviolence, as we disarm our hearts and minds, we can also disarm our countries and our world.

We are also challenged to build structures through which we can co operate and which reflect our interconnected and interdependent relationships.  Power sharing, consensus politics, multi optional preferendums,  there are many ways of doing politics we could use, which foster friendshps, co operation,  inclusion, and win/win situations.  The vision of the European Union founders, to link countries together, economically in order to lessen the likelihood of war amongst the nations, is a worthy endeavour.  Unfortunately instead of putting more energy into providing help for EU citizens, we are witnessing the growing militarization of Europe, its role as a driving force for armaments, and its dangerous path, under the leadership of NATO(US) towards a new ‘cold ‘war and further wars of aggression.   The European Union and many of its countries, who used to take initiatives in the UN for peaceful settlements of conflicts, particularly allegedly peaceful countries, like Norway and Sweden, are now one of the US/NATO most important war assets.   Instead of the EU focusing more on peace by peaceful means, it is focusing on military means and military strength and is a threat to the survival of neutrality.  Many nations have been drawn into being complicit in breaking international law through US/UK/NATO illegal wars of aggression in Afghanistan, Iraq, Libya, etc., to mention but a few.

On a recent visit to Afghanistan listening to young Afghan men recall how their friends were killed by USA ‘drones’ whilst our collecting wood, one asks ‘what happened to the rule of International Law standards that weapons and methods of war, which do not discriminate between combatants and civilians, should never be used?’.  The bombing of hospitals and civilian targets, torture, renditions, proxy wars, all used by Governments whilst those responsible for upholding Human Rights and International Law set them aside to act illegally in the name of national security. The most cruel and horrific weapons, i.e. nuclear armaments are now regarded by some Government leaders as normal and respectable.  Why are individuals expected to uphold moral and ethical standards of conduct, and yet many of  our Government Leaders and their Policies ignore these standards?

I believe NATO should be abolished.  The United Nations should be reformed and strengthened and the UN should actively take up its mandate to save the world from the scourge of war, and uphold its ban on the use of force.  Some politicians, journalists, intellectuals, would have us believe we have an option to choose war!   We do not, as under International Law, war is criminal and illegal.  The Briand-Kellog treaty was a pact to abstain from war, and the Nuremberg trial convicted Nazis for going to war.  War is illegal and criminal – this is international law.

But there is hope.  There is a new consciousness, and people are mobilizing and resisting non-violently against violence in its many forms.  They are saying no to militarism and war and insisting on disarmament.  Those of us in the Peace Movement can take inspiration from many who have gone before and worked to prevent war insisting on disarmament and peace.  Such a person was Bertha Von Suttner, whose book ‘Lay Down your Arms’ moved many in Europe to work for peace.  She was the first woman to win the Nobel Peace Prize in l905 for her activism in the womens rights and peace movement.  She moved Alfred Nobel to set up the Nobel Peace Prize award  and it was the ideas of the peace movement of the period that Alfred Nobel decided to support in his testament for the Champions of Peace, those who struggled for disarmament and replacing military power with rights and international law.  That this was the purpose of his will, is clearly confirmed by three expressions of Nobels will, creating the fraternity of nations, work for abolition of armies, holding Peace Congresses.  Alfred Nobel described war as ‘the horror of horrors and the greatest of crimes”.

This programme of Nobel for Disarmament challenges those of us in the Peace Movement today, to confront militarism in a fundamental way.   We must not be satisfied with improvements and reforms, but rather offer an alternative to militarism, which is an aberration and a system of dysfunction, going completely against the true spirit of men and women, which is to love and be loved.   As the military industrial complex is so strong and influential, in order to dismantle this, we in the Peace Movement in Europe, and elsewhere, will need a broad mobilization of ordinary citizens across the globe to work together towards this vison of Universal and complete Disarmament, driven on by the absolute belief and conviction that ‘War is illegal and immoral, it has to end, and it can be ended’. Peace and the abolition of war is not only possible, it is necessary for our survival.