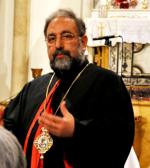 Archbishop of Aleppo of the Catholic Armenians
biography
THE CRY
In these days of dialogue and prayer, we have cried out: “WAR NEVER AGAIN”.
It is a cry that rises from my city, Aleppo, and from all the cities wounded by violence and conflict. It is the cry of children, women, refugees, who wait for peace.
It is the cry of Pope Paul VI, of Pope John Paul II, and Pope Francis: “WAR NEVER AGAIN”.
It is the cry of God Himself: “DO NOT KILL, do not wage war”. Because war is always a useless slaughter. A slaughter of human beings, of cultures, of civilizations, of nature, of the environment, and of all that is beautiful. It destroys cities where people have lived together for centuries, like our dear and beautiful Aleppo.
How dirty war is! It generates countless ills, it is at the root of so many interests, such as the trading of weapons, which are increasingly sophisticated and lethal: the vilest aspect is that war is waged in the name of God.
Everyone speaks of peace, “when there is no peace” (Jer 6:14).
War is not fought by war. War is not defeated by more war. War is overcome through dialogue, forgiveness, reconciliation, and the will to start a new life and follow new paths of peace.
This is our dream; it is the dream of the Community of Sant’Egidio, the dream of the Syrian people and of all peoples at war. It is the dream of Aleppo, which awaits the return of its kidnapped bishops and priests, according to the great vision of Prophet Isaiah: “They will beat their swords into plowshares and their spears into pruning hooks. Nation will not take up sword against nation, nor will they train for war anymore” (Is 2:4).
WAR NEVER AGAIN!