SPEECH OF THE PRESIDENT OF THE REPUBLIC OF CYPRUS, MR DIMITRIS CHRISTOFIAS 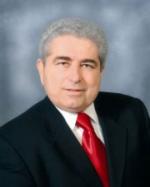 President of the Republic of Cyprus
biography