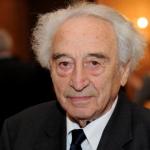 I was just 23 years old when I arrived in Auschwitz in 1943. Afterwards I came to Warsaw and Dachau (Mühldorf). During that time I was surrounded and threatened by brutality, violence, by annihilation and death. The laws of justice and injustice were no longer valid. In this world of inhumanity there were little signs of hope, rests of humanity among us prisoners: share a soup, bread, exchange a warmer jacket, a good word, or comply with a wish. This does not seem to be a heroic deed – but it was a very big risk. These signs of human closeness and solidarity sometimes helped to survive mentally and emotionally – signs, which came from another world. In Auschwitz I could still pray to God as I had learned and had done it at home.

In 1945, we - concentration camp prisoners - were liberated. Liberated from captivity – but were we really liberated? The conception of man, the conception of God, the relation of Good and Evil, the idea of a human society – all that was disrupted, destroyed, broken. We had been a normal, peaceful, Jewish family in a Moravian peaceful little city. We did nothing wrong, no resistance against authorities, and no rebellion against the State or laws. We were only victims because we belonged to judaism. Six of my closest family members were murdered in Auschwitz because they were denied the right to existence. Nevertheless, I cannot hate or feel an urge for revenge. If I would feel that way I should not have returned to the country of the perpetrators. The willingness for reconciliation comes almost by itself if you feel responsible for the future; if you want to commit yourself that people live together peacefully and in a human way. Therefore, I insist again and again that I do not come as a prosecutor but as a contemporary testimony. This distinction is very important to me!

And today? Do we not divide up according to race and membership of an ethnic group or tribe? Do we not exclude foreign cultures and traditions? Do we not too often judge somebody according to his religion – without really knowing them? How do we behave towards people who think differently, people with a different skin color? Nobody is born as racist or anti-Semite. I was taught to overcome these barriers not least during my time in the concentration camp. Evil is no force of nature, but is done by people. It is the free decision of every single person how he or she behaves, good or evil.
For 25 years, I have been on the way to explain to young people the destructive power of a dictatorship and to encourage them to be for democracy, to strengthen them. The education to live in a human way and the respect in living together with minorities starts in the family and in school. I want to tell the young generation: Do not look away, when others look away. Show courage, when the right of another person and his dignity have to be protected. You are not responsible for what happened. But you are responsible that it will never happen again.

Personally I have found my liberation: believing in the good of man and seeking God.