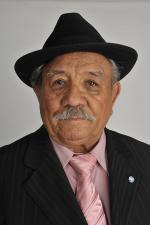 As one of the few who have survived the genocide of our minority, I want to testify about the atrocities done to our people and to the Jewish fellow-sufferers during the period of National Socialism.
At that time I lived with my family in a village in Lower Austria where I went to school and my father worked in a construction company. After having finished school I was working for the Railway Company. In 1942 my father was suddenly arrested by the Gestapo – at that time I was 15 years old.
One year later – in March 1943 – I was taken away directly from my working place by the Gestapo and together with my mother, my uncle and his children I was brought to the so-called “Gypsy camp” Auschwitz-Birkenau. My three elderly sisters had already been deported to Auschwitz-Birkenau before. I had to learn from them that my father had been beaten to death by the SS two days before our arrival.
The so-called „Gypsy camp“ was immediately next to the section where the Jews lived; we were only separated by an electrically charged wire. In our shack, 500 to 600 people were herded together – we lay closely packed in the plank beds. Wetness and cold were almost unbearable.
Shortly after my arrival I was assigned to forced labor in the commando channel construction, which consisted only of Sinti and Roma. We had no shoes, no socks – in rain and storm we had to continuously shovel clay.
The emaciated prisoners were driven with big sticks until they were totally exhausted; every evening we had to carry the dead home – someone who has not lived through this cannot imagine it. The camp road of Birkenau was covered with dead people. During the night when everything was frozen the frozen dead bodies were thrown onto trucks and driven away.
On one day we came onto a transport to Buchenwald for working as it was called. My mother cried during our farewell and said that I should take care of myself. I never saw her again. When the „Gypsy camp“ was dissolved in the night from August 2nd to 3rd, 1944 she was murdered by the SS in the gas chambers – together with more than 2800 of our people.
In Buchenwald I had to do forced labor in the quarry and every day I had to haul stones on a scale. My block was down in the forest – the so-called „small camp“. At the end of 1943 we were brought in cattle trucks to Mittelbau-Dora, which at that time was still a satellite camp of Buchenwald. In commando B 11 I had to work in the gallery with the drill and had to clear away debris. Sometimes there was misfiring and many prisoners died. We worked in several shifts. After eight to ten hours of severe slave work, the prisoners left the tunnel white as snow from the dust of the tunnel and after a sparse meal we fell to sleep deeply exhausted. Many of them were reduced to a skeleton. These so-called „Musulmen“ suffered especially from the despotism of the SS-men and had hardly no chance to survive. Only those who were able to work had a right to live. Those who could not work in Dora were lost.
In their desperation some prisoners tried to escape – most of them in vain. I still remember very well how the SS beat a Sinto black and blue, who had tried to escape. This prisoner had to stand directly next to the barbed wire and to shout again and again: “Hurray, I am back!” until he broke down. Afterwards he was hung up on the parade ground. There were also days when we had to muster for hours fearing for our lives. Many broke down completely exhausted and died.
At the end of 1944, when the Russian front drew closer we were supposed to be transferred to the concentration camp Neuengamme close to Hamburg. We started marching with circa 500 men from Harzungen – under the command of the SS. We had to march for days – even though we were completely exhausted. During the night we slept in the woods. Those who could not go on had to sit down in a ditch and were shot in the neck; the “Volkssturm” (the German Territorial Army created to defend the home front in World War II) then buried the dead at the roadside. When we finally arrived in Oranienbaum, we were only a few men. There, we were supposed to stop the Russian tanks in a trench, while the SS-men slipped away. Finally, I was able to escape into the woods and made my way through Austria. I was 18 years old when I was liberated, but in my home town I did not find anyone from my family at first. It was not before 1950 that I met two of my sisters in Nuremberg by chance: the three of us were the only ones of our family who had survived the genocide.
Dear Ladies and Gentlemen, for us, the few survivors of the Holocaust, there was never a real liberation. There are experiences and memories of this time, which we can never forget – which keep returning in our dreams at night. It took me more than 40 years to be able to speak about these horrific experiences. Today, I speak as contemporary witness to classes to convey to the young generation what became of the German people when there is a “constitution and a society without God, without conscience and without respect for the dignity of man”. I want to contribute that something like this will never happen again on German soil. Therefore, I call out to you: “You are Germany’s future, make something good out of it!”
Thank you very much for your attention.