In conversation with Bernice A. King 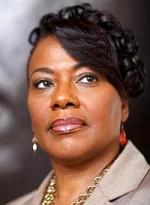 Jennifer (The King Center): Good evening, there is a portion of that speech, one of dr King’s father’s most famous speech “I have a dream” that states “I have a dream that one day little black boys and girls will be holding hands with little white boys and girls”.
Several decades later I was born a little white girl in Alabama who has eventually become a dear friend of his youngest daughter. His dream is still very much alive.
Dr King, I have had the privilege to supporting your work at the King Center for several years. Not only I call her dr King now, I also have the privilege to call you my friend, and when sitting across the table I call you “Bernice”. Tonight, I would like to invite all the students gathered here to call you Bernice, we are all friends after all.

Jennifer: I have had the privilege of learning first hand from Bernice about the person she refers to as “daddy”. I wish every students in this room could have that same privilege of sitting with her, so tonight we want to create an environment for you to be able to have a conversation with Bernice and to learn about the methodology and philosophy of non-violence.
Very quickly, before we get started, I just want to strongly suggest to every young person in this room to find someone who is older in years and make their life on commitment to learn from this person, who can be different from you in terms of ethnicity, nationality, religious perspective, or even political perspective.
Even if you don’t fully agree with that person, you should learn to love them, and to respect their humanity. This will change the trajectory of your life and our world.
Bernice, you have told me many times about your father’s philosophy and methodology of non-violence. We all know his history, its evidence: he had the capacity to change large societal frameworks. You have also told me that this was a way of life for him. Can you tell us what you learned from him on how this can be implemented in real life?

Bernice King: Good evening, everyone. First of all, I want to thank the Archbishop of Bologna, Matteo Zuppi, and the Community of Sant’Egidio, for inviting me to be with you this evening. My father believed that non-violence literally can solve crucial social, moral and political questions. He believed that this issues could be solved by using this philosophy and methodology of non-violence which we call now Non Violence 365.
For him it is a system of thinking and behaving that governs your day to day engagements, to which the dignity of all persons is considered regardless of their status, condition or behavior.
Therefore, non-violence was not just a tactic to be used in any kind of freedom struggle, but, literally, it was a way of thinking, of seeing people and a way of speaking and behaving. After he had studied people like Mahatma Gandhi, Reinhold Niebuhr, David Thoreau - philosophers and theologians - he had developed his philosophy of non-violence. He was able to find threads of truth in each of this different people to weave a whole philosophy of life. I often say that my father was a seeker of truth. Which means he was not afraid to learn from belief systems that might have been different from his own, and to discover a thread or a piece of truth in that particular belief system. It is like mixing different ingredients like we do with food and creating a new dish.
He developed six principles:

While listening to, reading and studying these principles, my father believed that our life is interrelated and interconnected, that there is an interdependence in humanity, and therefore we have to focus on uplifting our humanity. He also believed the preservation of others was the first rule of law, not self-preservation. As a Christian pastor, he believed in Jesus’ Sermon of the Mountain where Jesus said “love your enemies”, “bless them that curse you”, “do good to them who hate you”, and “pray for them who despitefully use you”. My father’s philosophy was grounded in agape, in love, which means an unconditional love for all of humanity. It is the love of God that operates in our hearth, that seeking nothing in return but only to give.
There are six steps of non-violence, but if you can’t commit to the principles first, using the six steps will not bring to any resolution over a conflict - because my father’s approach was all about reconciliation. He took very seriously St. Paul’s words on Jesus: “He gave us the ministry of  reconciliation”.
The six principles are the wheel and the six steps are the skill. So, when you practice the six steps, always keep in mind the six principles.

In other words, if you follow his principles, if you believe in them and embrace them, and if you follow the six steps, we believe that you’ll provide the opportunity for reconciliation to take place.

Jennifer: This is really how our friendship looks like: listening, asking questions and then learning. One of the most impactful stories that I think I have ever heard from you comes out of, I think, from one of your father’s quote. He once said “I have decided to stick to the side with love. Hate is too great a burden to bear”. I think we are all human beings and we have all this capacity to either love or hate. Each one of us has his/her own experiences in their life.
There is a story that you shared with me, and I wonder if you’d like to share it with  the students here today. It’s about the time you struggled with this burden of hate. Your father was assassinated by a white man in America, when you were five years old. I need to rephrase: your father was killed in America when you were five years old. And in your words, at the time, Martin Luther King was one of the most hated person in United States. For many years, due to the racial tensions surrounding his death, you told me that you struggled with hating specifically white men. Can you tell us more about that story and the journey you went through to change?

Bernice: Somewhere, in my twenties, I started really hating white people and white men. I had a lot of pain and anger that have developed over years due to what happened to my father and was happening to black people. One day, I was on a Christian talk show and the gentleman interviewing me was a white man and I was talking about my pain for the loss of my father and on growing without a father. In the middle of the interview he asked if he could give me a hug. Now, remember, I hated white men. Inside of me I was thinking “no, you can’t”. However, because my mother raised me in a more dignifying manner, I said “sure”. It was one of the most genuinely hugs I have ever received. It all started there, by turning my feelings and emotions. I started a journey, which changed me literally inside out. As I was traveling to different places to speak, and I would be on a plane, once I saw a white gentleman taking my coat and kindly asking me “Can I put it over you?”. What was happening is that I was beginning to understand slowly that you cannot categorize people by groups, because everyone is an individual created as image of God. Also, because I was holding so much anger and bitterness and hate in my heart, it was making me literally, physically hurting in my stomach. I had to release all of this hate. I heard someone saying “Hate is like drinking poison and expecting the other person to die”. Hate does more harm and damage to the person who hates, than to the person who is hated. Hate for me is more than a burden to bear. Now my journey has been on learning - because I am still learning - how to see the others as God’s sees them, and to love their heart in my heart.

Jennifer: I can say first hand she has embodied this teachings in her everyday life, not only in public, but even behind the scenes. You have also told me how your father’s teaching on non-violence as have been mistaken for passivity. Your father once said: “Our lives begin to end the day we become silent about things that matter”. He also believed that true peace is not merely the absence of tension, rather the presence of justice. How do you urge young people today to engage the issues of injustice they encounter?

Bernice: It is pivotal we understand how humans connect to each other in this universe. Also, we need the right heart, mind and attitude to embrace injustice, and wrongdoing ,and evil, so we don’t become evil ourselves. A former President’s wife, First Lady, Michelle Obama, said something a year ago, brought up again in the news recently: “When they go low, you go high”. Non-violence is about operating on a high, applying dignity and discipline. It is ultimately passive in the sense that it is not violent in its tone, in its attitude, in its perspective, but it is very active mentally, emotionally and spiritually. It resists evil and wrongdoing, using the principles I spoke about. For example, in my country, the United States of America, whenever there is a protest between citizen of the United States, law enforcement and the black community, people will protest to let their voices be heard, holding their signs. But, if their communications, their words become violent, such as curse words, and if they were holding signs demonstrating for the right to life, dignity and respect, then what they say with their mouth would prevent them to embrace non-violence. But I want to clarify something, because many people think and believe, and I understand why, that you need a little violence to bring change. I do not believe that, because violence always has within itself seeds of violence. According to my father, you can’t get to a peaceful ending by using violent means. When you use non-violence, you are using a tool and a weapon, but this weapon is full of unconditional love, commitment to justice, equity and commitment to the dignity even of the others, therefore it is not passive.