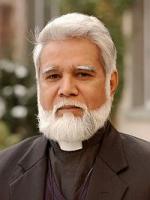 Cardinal, Archbishop of Karachi, Pakistan
biography
The preservation and protection of places of worship is an integral part of freedom of worship.  In any country where the religious minorities are recognized as citizens, they are an integral part of society. Their places of worship have not only to be tolerated but recognized and respected as part of the landscape.
In the Islamic Republic of Pakistan the state religion is Islam.  All the religious minority groups together account for not more than 5% of the total population.  However, our constitution clearly states that all religious groups are free to practice their religion.  Indeed in Pakistan there are many Christian churches, Hindu temples, Sikh gurudwaras, Bahai halls and a Zoroastrian temple.
The government of Pakistan even has a special fund for the repair and maintenance of the places of worship of non-Muslims.  In July of this year the Government of Sindh announced a huge amount of money for the repairs of St. Patrick’s Cathedral in Karachi and the restoration of its precious stained-glass windows. The cathedral was built in 1878 in the Gothic style and has been declared a Heritage Site by the Government.
However, the bitter fact remains that, although the majority of the population respects the non-Muslim places of worship, there remain deep-rooted prejudices and negative perceptions of non-Muslims in our society.   With the rise of militant and extremist forms of Islam over the last two or three decades there has been a marked increase in intolerance in society.  In such an atmosphere it becomes easy to inflame the passions in the name of religion by using hate speech.  A sad example of this occurred in 1997. A rumour was spread that some Christians had desecrated the holy Qur’an.  Instigated by an imam over the loudspeaker of a mosque, a large mob gathered and attacked a big Christian village called Shantinagar (Peace-ville).  The Christians fled to save their lives, but many houses and two churches were destroyed by the mob.
An almost identical incident took place again in 2009.  Fuelled by a rumour that the holy Qur’an had been desecrated by Christians, a mob attacked the Christian quarter of a village called Korian. Then they went on to the nearby town of Gojra where they burned down 50 christian houses and two small churches. In this case seven Christian also lost their lives.
The government was quick to respond by providing funds for re-building houses and churches.  More importantly, police protection has also been provided for places of worship.
However, in recent years, extremist Islamic groups such as the Talibaan - influenced by ISIS (Daesh) and Al Qaida - have become more violent. Unlike mob attacks, these fanatic groups do not hesitate to use suicide bombers and automatic weapons to kill worshippers gathered in churches to pray.  They have even attacked places of worship of minority Muslim sects.  Since 2001 to 2017 over a dozen such attacks have taken place on Christian places of worship, the worst being the attack on All Saints Church in the city of Peshawar killing about 150 Christians as they emerged from the church.
Thanks to the protection provided by armed Police and Rangers, the toll of those killed and injured in later attacks has been reduced significantly.  Yet, it is not easy even for the Government to eliminate this menace. At the end of July 2019 our Prime Minister, speaking on the occasion of Minorities Day, stressed that all places of worship of Religious Minorities would be protected. Unfortunately, not even a month after those reassuring words, a Shia mosque was attacked and four persons killed.
Thus we continue to live in a state of constant tension, knowing that somewhere, somehow and at some time there will be another attack by some fanatics in spite of all the precautions that are being taken.