MENU MOBILE
ROME 2021 > JEFFREY D. SACHS: "TO SAVE OUR PLANET WE MUST HAVE THE ACCOUNTABILITY OF ALL FOR THE COMMON GOOD"
PreviousNext

Jeffrey D. Sachs: "To save our planet we must have the accountability of all for the Common Good" 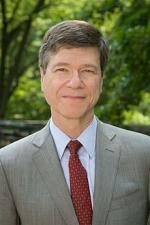 Thank you very much. It is indeed a joy for all of us to be together in person and with the Community Sant'Egidio. We look forward to this so much, and it's a great honor and pleasure to be here.

The people in this room want to abide by the framework, I have no doubt. The major religions of the world want to abide by this framework. There is no doubt. I downloaded, a moment ago, because I'm a kind of–you could call it–a "billionaire voyeur." I like to look at the bank accounts of the billionaires. Every day you can find online the wealth of the richest 500 people, updated daily on Bloomberg.com. Just now, I downloaded it and added up the columns: there are 500 people, their combined wealth is $8.1 trillion. That means that on average these 500 people have $16 billion of wealth. Now I have it on good authority that you can get by with just $1 billion. You probably would agree with me; you don't really need more than a billion in your bank account to get by. And yet their average is $16 billion. They have $7.5 trillion beyond the billion in their bank account.

Now why do I raise this point? Because by and large, and not with too much simplification, these people are running our world. You better believe it. In my country, the United States, which is governed by billionaires perhaps more than any other country in the world, we're in the middle of a debate because President Biden has suggested a tiny increment of taxes for the rich and this is deemed to be outrageous, impossible, un-American. The US Treasury had the temerity to say that because the rich are evading taxes–evading taxes, that means illegally not paying taxes, hundreds of millions of dollars–that our internal revenue service should have more revenue so that it could audit these people and crack down. The Republican Party said, "Un-American! We don't want the government meddling in the tax accounts of people." Because those taxpayers pay for the Republican Party.

If you want to see how look at OpenSecrets.org. It has what we can gather of how our plutocracy works. We know that $14 billion was given to politicians at the federal level in 2020 for their campaigns. $14 billion I can assure you where most of that came from. From the richest people, so that when the issue of enforcing the tax laws comes up, or the issue of raising taxes on the rich comes up, the representatives know just where to vote.

I'm sorry to sound a little crude in this. But this is what is standing between us and having a livable planet. A decent planet, a place where people can prosper. You know, just a modest proportion of the income on that wealth, just take a 5% return–and they earn more than that, I can assure you–but a 5% return on that $8 trillion comes to $405 billion a year. That's for 500 people on the planet.

You know what could be done with that $405 billion per year? Every child in every one of your countries could be in school with a decent education. Everybody on this planet could have access to primary health care. Everybody could have access to renewable energy. But they don't! 1 billion people are struggling for survival, including many people in the Honorable Foreign Minister's country of Tanzania, a wonderful country, a beautiful country, and a country with tremendous poverty. And then our governments say, "Oh, we don't know where to get the money! Budgets are so tight!" Well, I can give a list of 500 people with $8.1 trillion. And if you don't want to focus just on 500, focus on the 3000 billionaires in the world. They have $15 trillion of wealth. There's no shortage of funds, of technology, of knowledge. But the whole rich world together couldn't come up with $100 billion that they promised 12 years ago in Copenhagen for developing countries for the climate. It's mind boggling.

This is a mental disease of the super rich. Pope John Paul the second had a good term for it. He called it "structures of sin." Why do we tell each other all the wonderful things  we all agree should be done? Where is the accountability for the rich and the powerful?

I know in my country there is no accountability right now. The United States is a locus of the structures of sin. It is a country with incredible military power to destroy. By the way, if you I'm sure you would agree but if we haven't caught on now military power can create nothing good. Every war the United States has been in has been completely destructive.

The ignorance of the leadership in the United States is unbelievable. I'm not talking about particular individuals. I'm talking about a mindset because when you have a big army, you think it solves problems. When you have 6000 nuclear warheads, you think it solves problems. When you have hundreds of billionaires, you think you run the world. We have a media so vile, owned by Rupert Murdoch, another one of these billionaires that I regard as one of the most evil people on the planet, who tells Americans every day, "Don't do this socialism of taxing the rich. That's socialism."

You know what the biggest warning we get in the United States is? "Don't be like Europe." That's the great horror, of course, said by senators and congressmen who don't even have a passport, and don't know. This truly is our crisis, ladies and gentlemen. We do not have accountability of the rich and the powerful.

I'd like to say to the Foreign Minister, who we adore and who was a wonderful ambassador to the United States, and a minister of one of my favorite presidents of recent times President Kikwete. Tanzania is also under threat because of this kind of abuse. I plead with you to stop the East Africa crude oil pipeline. It's a disaster. It should not happen. It's another case of rich and powerful entities–in this case, Total–despite all of the knowledge and all of the evidence saying, "We don't care what the International Energy Agency says; we don't care what the Paris Agreement says; we don't care what the IPCC says. We're going to build a pipeline to pump oil from Uganda, through the most precious ecosystems you can imagine. Through the chimpanzee reserves, through the (?) steppe region, through the rivers. We're going to pump anyway, to get to the world markets. For what reason? We have no shortage of oil of what we have right now. We don't need any more oil and gas projects on this planet, period.

We need to help Tanzania have a massive expansion of renewable energy. That's what we need. We need Tanzania to get the resources from these billionaires and from the giant corporations, so that Tanzania can have its children in school, can have safe water and sanitation. Not to run a 1000-kilometer pipeline, which will burst, which will spill over, which will displace communities, which will destroy nature, which will bring more oil and gas to our destruction of the planet. Let's help Tanzania to have proper options on this planet. Not dictates of Total, for God's sake, and I mean that literally.

We need to know: we have a direction. The International Energy Agency says no more oil and gas projects. How hard is that to understand? No means no. Except to the structure of sins, where no means yes.

We are privileged that we are ahead of two major diplomatic events. At the end of this month, in Rome, and how appropriate, will be the G20 meeting, which brings together the leaders of the 20 largest economies of the world. Incidentally, it's 19 countries and the European Union. I am begging and pleading that we may get the G21 by adding the African Union to this group to represent 1.4 billion people on the planet who are otherwise not represented and whose voice and wisdom are crucial for our world.

Now, the G20 has about 85% of the world's GDP represented, and with Africa, would rise to about 88%. It has about 68%, if I remember correctly, of the world's population. With Africa, it would be another 17%, roughly. We would make it a representative body for deliberation.

And all the United States thinks about is more nuclear submarines, more alliances, more circling China. It's reckless, it's dangerous, it's destructive, it could bring us to the very brink of our demise.

After the G20 will be COP 26 This is the time when all countries of the world must say, "We are going to zero. No more emissions, no later than 2050." That's why projects like the East Africa pipeline make no sense. They will be stranded. We can't have these programs because we must get to zero. But at the same time COP 26 must say we absolutely need to act now, not on our words anymore, because our words are all over the pages. But to make sure that everybody in Tanzania can have electricity with renewable energy with zero carbon because your country is filled with beautiful sunshine. I know it. I love visiting your country. It's a paradise. It's beautiful, one of the most beautiful places on the planet. And everybody could have access to electricity with solar power. This is so beautiful, and the cost is so low. But we need these 500 people taxed properly so that the revenues are there so that this work can get done.