MENU MOBILE
FINAL > ROME 2022 - THE CRY FOR PEACE > DANIELA POMPEI AT #THECRYFORPEACE: "WHEN THE PATHWAY FOR ENTRY AND INCLUSION IS MENTORED AND SUPPORTED, IMMIGRANTS BECOME A GREAT OPPORTUNITY FOR OUR SOCIETIES"
PreviousNext

Daniela Pompei at #thecryforpeace: "When the pathway for entry and inclusion is mentored and supported, immigrants become a great opportunity for our societies" 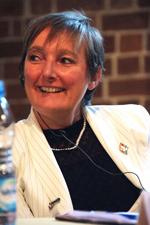 Since 1986 the Community of Sant’Egidio regards migration as a chance - a great opportunity. In the book Strangers, our brothers: towards a multiracial society -published in 1989 at the conclusion of a process of reflection started a few years previously - Andrea Riccardi made the point: “Immigration is much more an opportunity than a threat. Businesspeople, applying crude realism, are well-aware of this (…) In an environment of an ageing Italian [today we would say European] population, immigration is undoubtedly an opportunity”. This insightful reasoning dates back to 1989.

Many years later, this approach is still relevant and fit for our times.

It should be noted that today, like yesterday, the strongest supporters of migration as an opportunity are the businesspeople, the economists, the demographers. Forgetting for a moment political correctness, civil society seems less aware! The economic and business world recurrently flags the issue of labour scarcity. Some sectors, say, Tourism, Food and Agriculture, Transport, as well as Health and social care, are “thirsting for immigration”, given that labour is so scarce.

A recent World Bank report assessed the consequences of the Covid-19 pandemic drawing important lessons for migration policies in the Mediterranean Region. The World Bank encourages countries north and south to the Mediterranean to “build more resilient migration systems to cope with future shocks” and – surprisingly – recognizing a pressing need for more progressive policies “to strengthen cooperation and build more forward-looking migration systems that can help build much needed economic integration to stave off new crises” . A thought goes to the environmental challenge we are facing.

Eurostat has foreseen that to stem the sizeable reduction in its workforce, Italy should open the doors to more than 200,000 new migrants every year.

Against this background, we may understand more clearly the recent address by the French President Macron to his prefects. By announcing a new proposed bill on asylum and immigration, the French President declared the following: “our present policy choices are senseless […] We need to fast-track and improve the integration of those who have provisional papers, by providing language skills and jobs”. Macron also envisaged a better distribution of immigrants throughout France, privileging the depopulated rural areas.

By the way, allow me to remind ourselves that – unlike Italy - France does not suffer from a low birth rate. As of 1 January 2022, according to provisional data, resident population of Italy accounted for 58,983,000 persons, with a reduction of 1,363,000 units in the last eight years.

I am deeply concerned about a statistical survey showing that young people in Italy - both Italians and foreigners - are dreaming of a future elsewhere. Our National Statistical Office (ISTAT) 2022 Report indicates that the 59 per cent of under-18 young foreigners living in Italy dream of a future in other European countries. Together with the 42 per cent of their Italian peers, their intention is to migrate to the US, the UK, or Germany (first choices). It is mostly non-Italian women who project their future abroad.

After all, completing the school cycle is more difficult for immigrants, not least for those who have acquired Italian citizenship. They are disadvantaged vis-à-vis natives, ending up with poor outcomes, poor attendance, bad retention and dropouts. These very young students are not supported in their school career, lacking language skills, school support and a proper induction to the school system. This case relates mostly to teenagers reuniting with their families.

The school year 2020-2021 recorded a decrease of the number of foreign students for the first time since 1983. This phenomenon does not relate only to foreign students, as enrolments of Italians have also decreased. The figure is relevant because it is reverting a 30-year-old trend.

Today Italy is less attractive, and migrant families do not stay for long. This is a serious challenge that calls for policies providing more opportunities for young foreigners, in order not to give away their precious potential for our society.

We should urgently discuss about which type of integration policies are necessary to enable our new European citizens to stay and build their future with us. Allow me to list a few urgent actions:

-  Facilitating and simplifying the equalization of qualifications, particularly those related to health professions. There are plenty of Latin-American, Ukrainian, Indian nurses for whom it takes years to have their educational qualifications recognized, if and when they are successful.

-  Investing in education across the whole spectrum, from kindergartens to Tertiary education.

-  Simplification of administrative procedures to fast-track access to European countries and their social and health systems.

When the pathway for entry and inclusion is mentored and supported, immigrants become a great opportunity for our societies, not to be missed: they can turn into true patriots. I refer to the success stories of the numerous migrants who accessed Italy and other European countries through the Humanitarian Corridors project.

Participating fully in our national community, and contributing to making it better, is the aspiration of many young people who come from countries with painful histories. It is their major aspiration as soon as they land in our countries, and it is all in our interest not to let them go. Anna is a Syrian woman who arrived in Italy through the Humanitarian Corridor project in 2020. She works as the caretaker for an elderly woman and has clear ideas about her contribution to Italy, where she now lives. In her own words: «We are not here to eat and sleep, we are here to study, work and co-operate. We want to participate in the community that has welcomed us.” This is exactly what we need.

In the Gospel there is a well-known parable about a man that on the road from Jerusalem to Jericho was assaulted by robbers, stripped of everything and left half dead along the roadside. From time to time, researchers investigate the name of the robbers and try to identify the half dead man. What is certain is that pandemics, wars, climate shocks are affecting our societies similarly to the robbers of the Evangelical parable. Any of us could be on that road: affected, impoverished, wounded, deprived from hope and helpless.

I began by quoting the book Strangers, our brothers and I now come a close drawing from a reflection from the same volume. Jaques Dupont has been an outstanding theologian, and a beloved friend of the Community of Sant’Egidio. In 1989 he was proposing an insightful interpretation, also for our times, about the foreigner and the Gospels of Jesus. Referring to the parable of the Good Samaritan, Dupont observed that the man who was assaulted by the robbers, and was left half dead, is a stranger. Jesus tells us that the Samaritan is the one who helps, who was moved with compassion. It is actually Jesus himself, i.e., a Samaritan, a stranger who was considered odious. “He made the point of making of the Samaritan (a stranger) a behavioural model (…)  - concludes Dupont. In this perspective, the refusal of all borders gains momentum.”

The great opportunity symbolized by the presence of immigrants, is not just about an increase in workforce improving our GDP, or about young people mitigating the demographic winter of Europe, or about new taxpayers that can contribute, for some time, to our welfare and high living standards. All this is important, but the chance, the opportunity provided by the presence of foreign citizens in our societies, is much more. It is the Great Opportunity than cannot be further postponed, where we recognize than we cannot save ourselves alone. In the midst of the pandemic, Pope Francis prayed in Saint Peter’s Square with these words: “We have realized that we are on the same boat, all of us fragile and disoriented, but at the same time important and needed, all of us called to row together, each of us in need of comforting the other. On this boat… are all of us “