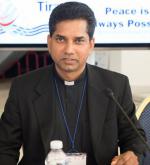 I bring you the warm greetings and best wishes of Cardinal Ayuso Guixot and the staff of the Dicastery for Interreligious dialogue. I also would like to thank the organizers for the invitation extended to me to take part in this important dialogue. The world has yet to recover from a devastating Covid-19 pandemic. Tragically, the war in Ukraine and other ongoing wars and conflicts, as well as climate change, affect all, worsening our already ravaged and battered humanity and the earth. Pope Francis said recently: “Europe and the entire world are convulsed by a war of particular gravity, in terms of the violation of international law the risks of nuclear escalation, and the grave economic and social consequences. It is a ‘piecemeal’ third world war” (Address to Participants in the Meeting of Pontifical Representatives, 8 September 2022). He also points out that “Violence is not the cure for our broken world” because “it can lead to the death, physical and spiritual, of many people, if not of all” (Nonviolence: a Style of Politics for Peace, 2017, n.2).

We all know that violent conflicts contribute to dehumanization by mitigating the sense of humanity in the individual and the communities. Families watch their loved ones being killed or raped, witnessing shooting, bombing, physical wounds, mass killing and mass burials properties destroyed, ethnic cleansing and forced mass exodus. War produces missing persons, children abducted, child soldiers, internally displaced people, divided families, abandoned elderly, war widows, war-orphans, and a generation born and bred in a violent environment. Tragic events are followed by more trauma from living in refugee camps or prisons. All of these are elements of dehumanization and broken humanity. The affected individuals and communities have become non-persons, contrary to original plan of God, who made the human person in the image and likeness of God and redeemed fallen humanity through by Jesus Christ. Why do we have so much violence today?

Warfare is the externalization of violence in the human heart. Jesus says: “For from within, out of the hearts of people, come evil thoughts” (MK 7:21). The peace activist Buddhist monk, late Thich Nhat Hanh, in a poem entitled “Do not shoot your brother” points out that our enemies are within ourselves:

Accordingly, we can argue that the “eco-problem” is an “ego-problem” and war and violence is first a “spiritual” or “heart problem.” Likewise, peace is also at the heart of all human beings, as well as a core value of all religious traditions and spiritualities.

In the face of perennial wars and conflicts, most people are tempted to yield to fatalism, as if peace were an unattainable ideal. Is peace possible? As religious leaders, we do not tire of repeating that peace is not something utopian but rather, it is possible if we have a “new heart” and a “new spirit” (cf. Ez 36:26). Peace is thus the externalization of peace in human hearts and therefore it first presupposes an openness to Transcendence, the Ultimate Reality which subsequently enables us to live in peace with others and our Mother earth. Therefore, durable peace is impossible without spirituality. Pope Francis proposes that “we need to dedicate ourselves prayerfully and actively to banishing violence from our hearts, words and deeds, and to becoming nonviolent people and to building nonviolent communities that care for our common home” (Nonviolence: A Style of Politics for Peace, 2017, n.7). Yet, on the contrary, we see some religious leaders justify the use of violence and also provoke, aid and abet, or ignore violence. How can we explain this scandalous contradiction?

Sadly, throughout human history, contrary to the founders of so many world religions and their subsequent prophets, saints and sages, some political and religious leaders have used and abused religions for ideological purposes. We also know that as in the past, today many religious leaders have tried to put into practice the noble teachings of truth, justice, love and freedom and thereby have transformed violent societies into peaceful ones. In our recent history and also in our present day, we have life stories of extraordinary persons who have wrestled interreligiously with questions of justice, non-violence, and ecological well-being.

Peace is a yearning and hope dwelling within all of us. Moreover, peace is a core value of all religions. If peace is possible, what can we as followers of different religious traditions do to build it? Jesus says “Blessed are the peacemakers, for they will be called children of God” (Mt 5:9). Pope Francis also recognizes that “Nonviolence is a typical example of a universal value that finds fulfilment in the Gospel of Christ but is also a part of other noble and ancient spiritual traditions” (Address to the Ambassadors of Burundi, Fiji, Mauritius, Moldova, Sweden and Tunisia, December 15, 2016). He also recognises that peacebuilding efforts on behalf of the victims of injustice and violence are not the legacy of the Catholic Church alone, but are typical of many religious traditions, for which “compassion and nonviolence are essential elements pointing to the way of life” (Nonviolence: A Style of Politics for Peace, 2017, n. 4).

Accordingly, religious leaders can lead their respective followers to “acknowledgement of the suffering of the victims, the confession and transformation of perpetrators, public apologies, acts of forgiveness, public memorials, the healing of a wide array of wounds, and the overcoming of hatred and enmity”.[1] Thus, they can foster justice with mercy. Besides, “no peace without justice” is intrinsically related to “no justice without forgiveness.” Late Desmond Tutu noted that “forgiving and being reconciled are not about pretending that things are other than they are.  It is not patting one another on the back and turning a blind eye to the wrong.  True reconciliation exposes the awfulness, the abuse, the pain, the degradation, the truth.”[2]

Moreover, ecumenical and interreligious approaches to peacebuilding go beyond  materialistic determinism, which  “looks at conflict, reducing its causation to issues of poverty, inequality, and development.”[3] This perspective, on one hand, ignores that the source of violence and evil is in the human heart (Cfr. Mk 7:21), and on the other hand, fails to take into consideration the resources of spiritual elements for prevention and resolution of conflicts.

Besides, peacebuilding is a team work and it embraces all sectors of society and all the relevant partners – people living in the local communities who perpetrate the violence or who are directly victimized by it, national elites in the government, business, education, religion, and other sectors; and, diplomats, policymakers, scholars, international lawyers, religious leaders, and other professionals.

Religions devote a large part of their energy to education. We all accept that to reach peace, we need to teach peace. If this is the case, then the present bellicose context cannot be changed unless we re-orient education to actualize this. Education for peace has the potentiality to bring about a culture of encounter and peace by helping individuals, families, schools, communities and groups to prevent conflict, strengthen inter and intra-group relations, repair and heal broken relationships, foster truth, justice, love and freedom. We need therefore to foster ecumenical and interreligious approaches to peace education.

Today, interreligious dialogue is indispensable to heal a wounded humanity and a battered earth. Reconciliation is emerging as an alternative paradigm to deal with the unjust past which seeks to re-humanize a dehumanized world. In this regard, as Pope John XXIII said: “The world must be educated to love Peace, to build it up and defend it. We must arouse in the men [and women] of our time and of future generations the sense and love of Peace founded upon truth, justice, freedom and love” (cf. Pope John XXIII: Pacem in terris). Let this be our common journey in these difficult times!