MENU MOBILE
FINAL > ROME 2022 - THE CRY FOR PEACE > ESTHER IWEZE ADAEZE AT #THECRYFORPEACE: "I BEG YOU: CONTINUE TO SAVE THOSE WHOSE LIVES ARE IN DANGER! GOD WILL REWARD YOU"
PreviousNext

Esther Iweze Adaeze at #thecryforpeace: "I beg you: continue to save those whose lives are in danger! God will reward you" 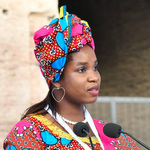 My name is Esther, I come from Africa, from Nigeria.

I arrived in Libya when I was 23 and stayed there for 6 years.  I thought I would never get out of that prison again. It was really like hell!

When I left my country I had the only goal of saving myself. There was no legal way to leave Nigeria, so I paid someone who took me to Libya.  The first place where I was held was the Sabha prison. Only then I realized that I was in danger. In that place there was no security, and we were often treated without humanity as slaves and no one could help me.

In these six years, everything has happened to me: violence, mistreatment. I was kidnapped and taken to the Tripoli detention center.  There were no windows, we, many women, were all sleeping on the floor, there was very little food, often only bread and dirty water once a day.  When some of us was caught we heard their screams while they were tortured.

this was terrible.  I've seen people die next to me.  I was so thin and sick, that even my jailers thought I was going to die and they let me out.

When some of us had the opportunity to leave with boats, they feel it as the liberation from those tortures we were undergoing.  We were so afraid of traveling at sea, almost none of us was able to swim but  the risk of dying in the sea was better than the suffering in the detention camps

In those moments I prayed to God to save me and I had the grace of being included in a journey of the Humanitarian Corridors from Libya. I arrived in Rome last July with the Community of Sant’Egidio.

I cannot tell you my joy when they phoned me in Libya and said that I would leave. It was as if the door of hell had opened and I finally saw some light.  Angels came to open the prison door.  It was the salvation for me and for those on my plane.  I traveled with a document, with a visa, they welcomed me with flowers and smiles.  It is the resurrection.

Today I am free in this beautiful country, I am a human person, I am no longer afraid when I walk on the street.  I am studying Italian, I want to contribute to the life of this country.

I am very grateful for the Humanitarian Corridors and, today I would like to ask that this way of salvation be given to so many people fleeing war, drought and poverty.

I beg you: continue to save those whose lives are in danger! God will reward you