MENU MOBILE
FINAL > LE CRI DE LA PAIX > MOHAMMAD SAMMAK AT #THECRYFORPEACE: "IN ALL CULTURES IT IS SAID THAT ALL PEOPLES ARE ONE FAMILY, SONS AND DAUGHTERS OF ONE GOD, WHO CREATED THEM ALL"
PreviousNext

Mohammad SAMMAK at #thecryforpeace: "In all cultures it is said that all peoples are one family, sons and daughters of one God, who created them all" 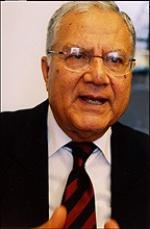 The Responsibility of Religions in the Crisis of Globalization

The world is changing. So is relations between peoples.

The environmental change is hitting hard: Tempests, hurricanes, floods, and dissertations are increasing in number and in power, and destruction. So is migration from east to west, and from south to north. Peoples migrate with their traditions, cultures and religious beliefs.

Now one third of the 2,2 billion Muslims are in non- Muslim countries. There are in South Korea more Christian Prespetarians than in the U.S.A.

One fourth of all Christians are Africans. All of these features indicate that we are more connected, but more apart.

Military confrontations make this phenomen more difficult, and more dangerous. We have seen this in the Middle East, since the Palestinians were forced to migrate to Lebanon, Syria and Jordan.

Their migration dis-balanced the social order in these countries. It inflamed a civil war in Lebanon. So is the danger today from the Syrian migration.

Peoples migrate with their beliefs and with their way of living, which are different from the beliefs of the host peoples and their way of living. So the confrontation becomes imminent. Italy in particular, and Europe, as a whole know this very well, the consequences no matter how hard and complicated are also well known and cannot be avoided.

After all this is one face of globalization, a fact no one can refuse, stop or ignore.

In all cultures it is said that all peoples are one family, sons and daughters of one God, who created them all. But the fact is that God created us differently, and to be different. And the fact too, is that we repeat in our religious prayers, and in our human culture this theory (of being created differently), but we don’t accept and respect it as a fact of life.

Look at the destructive war in Ukraine Priests of the same religion bless warriors and their armaments on both sides of the conflict. We have seen such crazy features in the Middle East, when terrorists led by their terrorist religious leaders, killed Christians as well as Muslims, and destroyed their houses of worship simply because they are different.

The fact is that the other cannot be other if he-or-she is not different. That is why humanity needs to promote the culture of enjoying differences between peoples.

I know, honestly, that St. Ejidio is promoting this culture decades ago, and in all its international gatherings. I know too that the UNESCO Org. drafted a document asking all nations to accept and respect cultural and religious differences. But the result so far is not encouraging.

Yes globalization and new technologies shortend distances and opened widely doors of knowledge, but it did not change the deeply rooted culture of refusing the other. The Ukrainians for example, lived together for centuries, east and west... Catholics and Orthodox... Russians and non-Russians, but all this history of togetherness did not spare them the miserable destructive war they are suffering from. And we are sharing with them the sufferings. Being together does not mean being connected.

We humans have been imagining the end of the world since we inherited it, and in most of our mythologies the world ceases to exist before it can begin. Zeus and Odin had to wage total war on their forebears to make way for man. The story of Noah’s ark prefigures many modern fantasies of interstellar colonization. Paleontologists tell us of five major extinctions, the last of which was brought to a head, in theory, by a mischievous asteroid that did in the dinosaurs and coated the world in a thin layer of iridium-rich sediment 66 million years ago.

Now, we are matured enough as a species that today no longer need the intervention of a god, an asteroid or belligerent aliens to bring about the end of the world. Whether we are mature enough to save ourselves from ourselves is an open question.

Religion teaches us that God created us (humans) to be his viceroy in caring and administering the world. Globalization can be a good start, but neither heavy armaments, nor climate change is an indication that we are up to this noble mission. The truth is that armament is a self-destructive role. It is a man-made asteroid that might make us humans modern dinosaurs.

We are already facing the destructive consequences of a one degree cent, rise in global warming, but we boost that we can produce a bomb five times greater than the Center of the sun.

So far, humanity is destructively squeezed by climate change and armaments. Both are man-made. And both can and should be dismantled.

When? Now before it is too late.

Why? Just to be humans and God’s viceroy.