Shaykh Muhammad bin Abdul Karim al-Issa at #thecryforpeace: "all disputes can be resolved with introspection and wisdom" 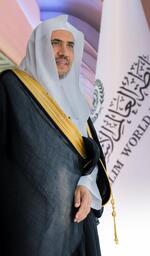 Respected moderator:
Your Excellencies and Eminences:
Ladies and Gentlemen

I am delighted with this fraternal meeting, which is organized professionally, as always, by the Community of Sant'Egidio. So, thank you and much appreciation for this important meeting.

I start by saying: May God's peace be upon you all.

As per the beliefs of the revealed religions, the origin of human creation came from the spirit (which is the spirit of God,) and that man is created in the image of the Creator.

But, what does this mean?

What does it mean for us to be created in the image of the Creator, glory be to Him. As God created our father Adam in that image.

This means that mankind is honored, and has a sanctity linked to their creation, (sanctity related to the spirit that is from God), this is unique to mankind alone and not to other creatures.

All this distinction unique to mankind has inevitable and spontaneous obligations (similar to a tax that we must pay,) but it is a moral-ethical tax.

As believers, we pray to God every day to bring understanding and peace so that brothers can embrace each other again.

Yes, when our world grows apart, a void gets created which is then filled with negative thoughts and interpretations, giving rise to convictions and decisions that may sometimes be extremely dangerous and complex.

Engaging in wise dialogues, having sincere intentions and making sincere promises not only prevent conflict, but also create clarity, understanding, love and promote joint action. We must have a measure of mutual forgiveness (the absence of forgiveness results in tension and stubbornness from the involved sides) which is fueled by arrogance and defiance.

Regardless of the differences, all disputes can be resolved with introspection and wisdom, (regardless of the pretexts, they all must be addressed) In such wars, there is neither a permanent winner nor a loser, despite many people's delusions, everyone is a loser.

The only winner in such dangerous and complex back-and-forth, is the logic of wisdom, especially since nations across the world have agreed to sign a single international charter, which is the Charter of the United Nations.

I reiterate, just as God created us in that honorable and sacred image, He has instilled in our natural disposition common human values. Thus, it can be said that wars result in conflicts that erupt within us internally, and the distance that keeps us apart from each other because of misunderstanding the logic behind our lives.

Do we really embody what it means for us to be human?

Man is a creature who is honored by the way his created and his sacred spirit, he has been set as responsible for earth, he is the creature who has been entrusted with the responsibility to preserve this world.

So, what is the role that must be played by people of faith in modern conflicts?

What about their role in creating peace?

having sincere faith, in those abovementioned meanings, (believing in those shared values), gives us a deep understanding of one of the reasons for our existence.

(Believing in the One and Only Creator is a creed), (Working on developing earth and preserving it is a responsibility), and (sensing this responsibility out of faith and a sense of accountability before the Creator, are among the most powerful factors in prioritizing precaution, tolerance, introspection and encouragement).

All of these stem from religious concepts (even though religions’ creed differ between them), this gives us clear evidence that religion is an influential force.

But some followers of religion may have made this force (because of their actions) an uncontrollable or unreliable force. And in some interpretations, it may have been, a cause for bloody historical wars.

We have witnessed the repercussions of this when true belief in the Creator is turned into something different, and the true message of religion is misused and distorted to separate from the county under the pretext of religious extremism or to encourage acts of violence.

Our world has suffered from the repercussions of trying to manipulate religion, and humanity has witnessed unspeakable devastation and attacks.

Throughout its long history, our world has suffered from the bitterness of the conflict between some followers of religions and civilizations, and from the deepening of divisions that ignored many common values, that if we had adhered to, we would have guaranteed peace in our world and harmony in its national societies.

Religion is not a problem in itself, but the problem is in understanding it, and the problem is also in its implementation and distorting its noble goals for the sake of ugly and greedy interests.

I do not think that there is a worst exploitation than the exploitation of religion, where liars speak in the name of the Creator and promote that in front of their herd who are oblivious to the truth because of deception and lies.

When we humans realize that differences and diversity among us is a natural part of life and it is inevitable, and that this inevitability is a divine will of the Creator, then we have to realize that this wise will of the Creator did not want to inflict evil upon us as the wicked think. God as we know is merciful and compassionate to his creation. Any one who has the truth, whatever this truth maybe, they have an obligation to present it to others, bundled in a warping of a gift, kindness and love.

The Muslim World League, headquartered in the Holy City of Makkah,  acts as a broad umbrella for the scholars, thinkers and youth of the Islamic world, and we have taken a pledge upon ourselves to continue respecting everyone, to continue serving humanity, to love everyone and be tolerant with everyone no matter the mistakes or wrongs they may have committed, because we realize that inside people there is a seed of benevolence that we must seek and revitalize in the conscience, and activate its outward actions through doing good deeds, we also took it upon ourselves to raise awareness on controlling religious sentiments and making them more enlightened and wise.

We all want peace for our world, and there is no peace without having inner peace and wisdom and brotherly understanding.

We must emerge victorious against any attack on our common values, be it religious values or patriotic, to ensure a world full of love, understanding and peace.

Thank you very much for your time.

May the peace, mercy and blessings of God be upon you.