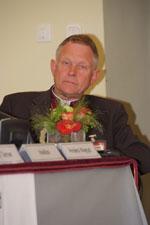 Any person who has her or his God may despise man, may despise other humans, may be convinced that he or she is one of the few who believes correctly, who has the truth, who may affect others’ lives against their will. God is with me, I am allowed to do this against someone else, maybe I even must, I have to, in order to be true to the calling bestowed upon me. God is greater, far greater than any human being and far greater than any part of God’s creation.

One hundred years ago so called Christian nations stood against each other. Enlightened Christian traditions, as many thought of themselves. A war would never again be possible between these nations. But it was and religion did not hinder it – instead it sometimes flared the fire. Then – and now – in ongoing conflicts. It is, of course, that side of religions which it is easy to make news out of, as there is conflict, conviction, lack of distance and lack of conscience, all at the same time. There was, and there is now, other traits in religion that serve moderation, peace, understanding and commitment to the human. But whoever thinks, that she or he has God or even those who have encountered God, do not necessarily see man or humankind.

But some prerequisites might help in order fulfill the wonderful vision of this seminar, that Whoever encounters God, does see man.

We could of course put those prerequisites on us, as humans, and there are necessarily such prerequisites, as respect for the other, as longing for justice and love and so on. When I prepare this I realize I want to write more about that, but I hope my fellow panelists have or will do so, because I would like to focus on some prerequisites or at least helpers in the religions per se.

In Christian traditions, which are the ones I can talk about with any credibility whatsoever we have some important helpers, all extremely traditional, to keep the immanent and the transcendent together, helpers that could make it come true, that Whoever encounters God sees man. Let me give three short examples:

1. We have a catholic faith. Of course, I do not belong to the Roman Catholic Church, but I do have a catholic faith, a faith with ambition to encompass and be part of the whole, the totality – of Scripture, of Tradition and of the World. There are tensions in the bible between the covenants involving the chosen few and the whole world, but the whole world is always there and the turn from at least Peter and Paul immediately involves all peoples. Then human value cannot be different for different peoples, not even for those of other or no faith.

Being a world religion helps us not to forget this, but there are no guarantees that not some do forget it. Living at a time when more and more people constantly encounter others with cultural and religious roots far away can work both ways. It can mean more understanding, more solidarity – or more fear, escapism and marginalization.

2. Our triune God is creator and sustainer of all, regardless of faith or origin. Whoever encounters a human sees God. That feeds wonder and awe, humility and gratitude. And our Saviour, “Jesus Christ, the Only Begotten Son of God, born of the Father before all ages. God from God, Light from Light, true God from true God, begotten, not made, consubstantial with the Father; through him all things were made.”

Jesus Christ is obviously not limited to the believers. He is also all over. Our task is to try to follow him and to make him known. Not to bring him in into what is already his. And Jesus is also, according to the Nicene Creed, which was what I quoted, involved in creation, all of creation. Whoever encounters God sees man.

3. “For us men and for our salvation he came down from heaven, and by the Holy Spirit was incarnate of the Virgin Mary, and became man.” That is how the Creed continues. Creation is sanctified through Jesus Christ’s walking on it, living in it, surviving by it. The very special feature in Christianity of incarnation is a challenge and a blasphemy to many. It shows us both the power and the powerlessness of God and the reciprocal necessity of our deeds for the other. For all what you have done to any of these who are my brethren, you have done to me. Or you have not done to me, as it is said in Matthew 25.

So my three points, examples of help from within the Christian tradition were:
Catholicity, Trinity and Incarnation.