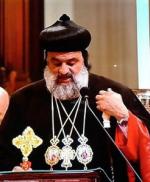 "Peace I leave with you, My peace I give to you;
not as the world gives do I give to you. Let not
your heart be troubled, neither let it be afraid."
(John 14: 27)

First of all, we would like to thank the community of Sant'Egidio for inviting us to this conference. This is indeed an opportune time to hold such a conference dealing with the issues of peace and the future. Today, our world is witnessing tremendous changes and our humanity is devastated with many wars and conflicts. Our gathering here, in the city of Antwerp, is but a reminder to all of us that not much has changed in our human experience. It was in 1914, exactly a century ago, that this beautiful city was under siege as part of the clash of nations over the control of the resources of our earth. Therefore, the quest for real peace becomes the most pressing priority which should be pursued by all.

The Middle East: No Peace, No Future

We bring with us the voice of millions of Christians and non-Christians in the Middle East. The voices of Sunnis that are killed by Sunnis, Shias that are targeted by Islamist fanatics, Christians and Yezidis that were expelled from their homes and towns, children that have lost their parents, and millions of people who desire to live in peace with each other, but international politics and religious fanaticism prevent them from doing so.

The gravity of the events that are taking place in the world in general and in the Middle East in particular, is beyond all which we have seen or heard of in the past. History is not even equipped with the appropriate terminology to accurately describe what we are witnessing. The aspirations of the people of the Middle East to live in peace and prosperity have been shattered. The smaller religious communities are especially affected by these tragic events. What kind of future awaits these communities? How can young people fulfill their dreams? Will there be any future for them in their own homeland?

"Peace is the Future". Without peace, there will be no future for humanity. Without peace, humanity is in misery and it will collapse under the heavy weight of massacres and genocides. Peace creates harmony between different races and proves the possibility of life in mutual understanding and love despite differences.

While peace is a requirement for a free life; for Christians, it is a way of life. Christ is the Prince of peace, who calls the peacemakers as the children of God.

Moreover, for Christians, true peace is that which is given by our Lord Jesus Christ to us: "Peace I leave with you, My peace I give to you; not as the world gives do I give to you. Let not your heart be troubled, neither let it be afraid." (John 14: 27). The peace of Christ is given to us in the midst of turmoil and chaos. It is a peace that cannot be taken away from us. It is the everlasting peace everyone is searching for.

The real challenge is to relay this concept of peace to a family living in the middle of a war zone. In so doing you will come to realize how this divine peace is foreign to this world. Very few are those who, totally submitting to God's will and simply believing that the Lord is a source of peace in our troubled world, will be able to fully grasp and accept this.

Allow us now to share with you some of what we have observed during our recent visits to our suffering people in different countries in the Middle East. It will give you an authentic picture of the conditions under which Christians and others are living now. It remains up to you to imagine what peace means for these people.

We have visited twice our people in Iraq who are suffering from persecution and expulsion: the first time we went to northern Iraq on June 13-16, 2014 and visited the more than fifteen thousand people who were driven out of their homes in Mosul by ISIS. They took refuge in the towns and villages of the Nineveh Plain. Our second visit took place on August 20-25 of this year. Together with a delegation of the patriarchs of the East we visited these same individuals who were expelled for the second time in a few weeks. This time more than one hundred and twenty thousand Christians and other minorities were all driven away from their homes in the towns and villages of the Nineveh Plains into the region of Kurdistan.

During that visit we arrived in the village of Araden where some fifty families have taken refuge in the local church. While meeting with these people in the church hall a three years old child approaches me with his twin brother. He widely opens his arms and innocently says in Syriac/Aramaic : " …… we have no place". They were living with more than 70 people in this small church hall; they did not have a place in that crowded small hall, yet, these two boys were luckier than many other children who are still sleeping under tents on the streets, in the parks and inside unfinished buildings.

During each visit, we have observed that Christians still held hope in the power and mercy of the Lord: His power that will lead them out of their present misery and His mercy that will move Him to save them.

In each visit, we have spoken to the displaced Christians; we wanted to assure them that it is not too late, that there is still hope to find a solution. We have addressed the politicians, locally and internationally, asking them to provide these people with international protection. We have written to the UN Secretary-General, the Security Council, the European Union, the UN Human Rights Commission. We have also motivated the Lebanese government to report to the International Criminal Court and ask them to investigate these evil acts, which constitute crimes against humanity.

A peaceful solution for these suffering refugees ought to result in their return to their homes in the Nineveh Plain and the city of Mosul. It should also help them defend themselves against future attacks.

The situation in Lebanon is also very worrying: sectarianism is in control of the political life in the country, division is established and schism between the different constituents of Lebanese society is growing beyond manageable. ISIS, Alnusra front and other armed groups are having a strong hold on several Lebanese towns and villages. The small town of Arsal, which lies on the Qalamon mountainous region on the Syrian-Lebanese border, continues to present a big challenge to the government of Lebanon. Some thirty Lebanese soldiers are being held hostages by these terrorist groups. Every now and then a soldier would be slain.

In Lebanon, unity is most needed; in fact, it is the only element that can bring peace into the complexity of confessional groups: unity of will to build together the future for the young citizens, to help elect a new president for the country.

As the crisis in Syria was unfolding, we came to realize that the war benefitted no one. Although there were some legitimate calls and need for political reforms, this did not justify all the barbaric acts of kidnapping, beheading, killing and destroying everything. Even old trees were uprooted or burnt, the monuments were also destroyed and statues beheaded!

Syrian people in general became victims of this senseless war. While Christians were not specifically targeted for their religion, they took more than their share of suffering and martyrdom. Sadad is an exclusively Syriac Christian town of about fifteen thousand inhabitants. Sadad was attacked by Alnusra Front and other groups. In one day 45 people were killed. During my last visit to Sadad, I had to look into the eyes of a father who lost his wife, his two children, his uncle and his mother in law, together with two other members of his family. They were all killed and thrown into a well. How can we speak of peace with this heartbroken father?

Today, more than four million Syrians are living on the handouts from the international Food Program and other charity organizations in a country that was self-sufficient and debt-free for many decades.

More than 500 days have passed since the abduction of the two archbishops of Aleppo, Boulos Yaziji and Youhanna Ibrahim. We are still waiting to hear about their whereabouts and their conditions. These are two men of God who were on their way back from a mission to rescue two kidnapped clergy, when they were abducted. Isn't the international community ashamed of its silence about the abduction of these two prominent figures? We call upon all people of good will to do what they can in order to secure their immediate release.

We are commemorating here the centennial of  World War I. Shortly after the start of the war, genocide was committed against Christians in the former Ottoman Empire. Together with some one and a half million Armenians, more than five hundred thousand of our Syriac speaking people were killed. These were targeted simply because they were Christians. It is a reminder that man can be monstrous and act in an outrageous way. We, in the Syriac Orthodox Church of Antioch, are planning a year-long commemoration of the Syriac Genocide, Sayfo, in order to remind ourselves and others that the world should be united against terrorism and against the spread of hatred and extremism which threaten the basic rights of people.

God created the world in order to exist in peace and harmony among all its elements. Human beings ought to be the agents of such peace. Sustainable true peace is not merely the absence of war and violence, it is rather the result of a healthy relationship with our Creator. It is then reflected in our relationship to each other and with nature. Therefore, building a culture of peace should be a common goal for us all in order to prepare a better future for generations to come. In so doing, we need to draw on lessons learnt from our past experiences. World wars, genocides and religious and ethnic cleansings are shameful stains in the history of our human race. It is our and every generation's responsibility to promote true peace.

The explosive situation in the Middle East, including the recent violence in Gaza is heartbreaking; yet, hope for peace and optimism that a bright day is near, still exist in the hearts of people. We take this opportunity to call upon all people of good will to work together towards promoting peace in the world. Mindful of the impact of religion in the public life, we believe that our role as religious leaders in spreading a culture of understanding and acceptance of one another is paramount. Hence, the efforts of the Community of St. Egidio are greatly appreciated. Organizing events and conferences such as this one, which promote the spirit of tolerance and peaceful coexistence, will surely bear fruits for our broken humanity. "Blessed are the peacemakers, for they shall be called children of God" (Matthew 5: 9).