Christians in the Middle East: What Future? 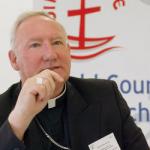 It gives me great pleasure to greet you all in the name of the Pontifical Council for the promotion of Christian Unity, the body charged within the Roman Curia with the task of carrying out the Catholic Church’s commitment to the ecumenical movement, to the cause of reconciliation and peace between all the followers of our Lord and Saviour Jesus Christ. I greet you on behalf of our President Cardinal Kurt Koch and, in an ideal sense, on behalf of all those who pray and hope for the fulfilment of Jesus’s prayer at the Last Supper: that all may be one (cf. Jn 17:23).

What today is called “ecumenism”, namely the search for closer communion between the Churches, has always existed in the Middle East. It is especially a local ecumenism, built on the solid ground of family relationships, friendship, collaboration and solidarity. It is the ecumenism of life, of encounter, of mutual support. Christians see first what they have in common - their profession of faith and their shared history – and only then do they look at their differences. And most differences are accepted, without discomfit, as legitimate expressions of different cultures, ethnic origin, and traditions going back to the beginning. They are seen as a richness to be prolonged and safeguarded.

In this sense, Christians in the Middle East see themselves as brothers and sisters in the one family. In their suffering they love one another and help one another. And we too, who live in other places and other contexts, must feel their pain as our own, their need as a call from the Lord: “ I was hungry and you gave me to eat, I was thirsty and you gave me to drink; I was a stranger and you took me in, I was naked and you clothed me....” (Mt 25).

Relations between the Churches were never a question of merely theoretical  -even theological - concepts and doctrines. More than ever today, in the present circumstances, a theoretical discourse seems an absurdity in the face of the violence, misery and social upheaval brought by the various conflicts.

The agony of the Middle East affects every Church, as well as other religious groups in the region.  We must  hope that out of this terrible pain the Lord will work the wonder of a deeper spiritual and theological communion among the baptized, and a restored, improved coexistence with their Muslim neighbours.

The Churches cannot solve the macro-economic and political issues at the heart of the present tragedy. They can stand together to bring material and spiritual relief and comfort to the suffering populations. They can continue to call for an honest and respectful dialogue with the majority religious tradition in the area.

We can make our own the sentiments of the Common Declaration between Pope Francis and the Ecumenical Patriarch Bartholomew, signed last May in Jerusalem: “we express our shared profound concern for the situation of Christians in the Middle East and for their right to remain full citizens of their homelands. In trust we turn to the almighty and merciful God in a prayer for peace in the Holy Land and in the Middle East in general. We especially pray for the Churches in Egypt, Syria, and Iraq, which have suffered most grievously due to recent events. We encourage all parties regardless of their religious convictions to continue to work for reconciliation and for the just recognition of peoples’ rights. We are persuaded that it is not arms, but dialogue, pardon and reconciliation that are the only possible means to achieve peace.” The Pope and the Patriarch remind us that just as the blood of the martyrs served as fertile seed for the growth of the early Church, so now the suffering of twenty-first century Christians will serve to build ecumenical unity.

I would conclude by saying that in our concern for the tragic situation of our Christian brothers and sisters in the Middle East, it is essential that we avoid every form of ecclesial exclusivism. Christians will either survive together or they will not survive at all. The Pontifical Council for promoting Christian Unity deeply appreciates every effort to help them, and hopes that these efforts will bring the various Churches even closer to one another, so that in the short term they will support each other and speak with one voice, and in the long term the movement towards the restoration of the unity of all Christians will be strengthened, so that the world may believe (cf. Jn 17:21).