Eastern Christianity on the narrow path 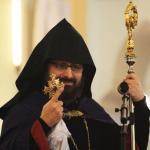 Dear participants, fathers and the most beloved brothers in Christ. It is great privilege to address to this honorable assembly. I offer my heartfelt gratitude to the Sant’Egidio Community to his founder Andrea Riccardi and the president Professor Marco Impagliazzo. These kinds of meetings remind us our common roots in Jesus Christ and our ecumenical solidarity. Sometimes there is very little to do at the face of disasters, calamities and catastrophes like we pass through in the Middle East but we can only come together to cry and to pray together. We are going to discuss and analyze nearly a hopeless tragedy, not unlike the terrible temptations of Job by Satan. When Job’s concerned three friends “heard about all the troubles that had come upon him, they set out from their homes and met together by agreement to go and sympathize with him and comfort him. 12 When they saw him from a distance, they could hardly recognize him; they began to weep aloud, and they tore their robes and sprinkled dust on their heads. 13 Then they sat on the ground with him for seven days and seven nights. No one said a word to him, because they saw how great his suffering was” (Job 2:11-13).

But we know what happened later: “After this Job opened his mouth and cursed the day of his birth”. I am sure in this meeting there are some fathers who witnessed such an awful incidents and horrible crimes having committed and being done to their own people that like Job they have nothing to do but to curse the fate of the Christians in the Mideast in the past and today. Before any speech we need to outlet a shivering cry to heaven like the Prophet Jeremiah who witnessed the destruction of the Temple and the exile of his people after untold sufferings.

“Joy is gone from our hearts;
our dancing has turned to mourning.
16 The crown has fallen from our head.
Woe to us, for we have sinned!
17 Because of this our hearts are faint,
because of these things our eyes grow dim
18 for Mount Zion, which lies desolate,
with jackals prowling over it.
19 You, LORD, reign forever;
your throne endures from generation to generation.
20 Why do you always forget us?
Why do you forsake us so long?
21 Restore us to yourself, LORD, that we may return;
renew our days as of old
22 unless you have utterly rejected us
and are angry with us beyond measure” (Lament 5:15-22).

What you are going to hear from the participants in these two consecutive days will be mostly this sort of complaining but not without a just reason at all. We are not happy indeed. For the Eastern Christendom is entering a dark night with a few faint stars of hope in the sky. With the psalmist we ask the timeless question of helpless persons:
I lift up my eyes to the mountains—
where does my help come from? (Psalms 121:1)

Does Christianity have a future in the Middle East? Of course does! But how? I do not know like you. Every news leads us into pessimism and we, too, lift up our eyes to the mountains. And our Christian hope reechoing from the mountains:
My help comes from the LORD,
the Maker of heaven and earth. (Psalms 121:2)

Of course God inspires his children to come together and with a brain storm to look for solutions. There are things to be done by man and things to be fulfilled by God. Many local and international conferences and meetings are dedicated to this fiery topic. Many competent experts on the Mideast have already made the diagnosis and offered the remedies. I hope in this present meeting it would be possible to shed a new light on the issue. Unfortunately I do not have any satisfying answers to the problems but rather I have heavy questions taunting my heart and soul.

I come from Turkey where one hundred years ago the Armenian Christian people passed from the vicious, diabolical and brutal persecutions which now the Eastern Christianity is passing through. A hundred years ago Christian population was twenty five percent and now 0.2 percent, not more than 150.000 Christians living among a 78 million. There is not any example that in an Islamic country Christian population can increase more than five decades. Or I do not know. If somebody could correct me I would be pleased. An open or subtle oppression and persecution always exist in Islamic countries and this doesn’t seem to change in the near future. If Turkey, a Muslim country with the most modern and secular state in the Middle East shows such a treatment to the Christians, then what is the hope for the other Islamic states which are getting a rather more radical outlook?
Yes, I have more questions than answers and I hope some positive answers may come out from the respectable participants. For example:
After the conquest of Christian lands by Islam there is a non-stop discrimination against Christians which from time to time takes more violent forms of extermination which ends Christian pogroms, genocide, exile and immigration. Is there any sign that this process of annihilation can stop before reaching zero point?
Can Christians enjoy equal human rights in the Islamic states where "Islam is the state religion or the primary religion of the state is Islam?

Will Christians give up their voluntary policies of birth control and will plan their families for more than three children in the Mideast?
When will the Western world begin to notice and hear the plight of the Middle East’s suffering Christian communities? How many political institution do you know beside Sant’Egidio community which are really feels burning urgency do something immediately now?
When will the political left in the West come to the recognition that Christianity is now the globe’s most persecuted religion and not a tool in the hand of imperialism?
Is there any chance for the diminishing Christians to be noticed by the policy makers of the USA?
Is there any serious concern for the ancient churches of the Middle East (Eastern Orthodox, Armenian, Chaldean, Maronites, Copt, Assyrian) which are theologically and culturally alien to many European and American Catholics and evangelicals?
Can western politicians demand what Muslims living in the West demand for themselves – and receive – by way of rights and legal protections they ought to be ready to grant to Christians living in Muslim-majority countries?
Is it possible to convince Islamic majority that if Christians go they will not enjoy a better life under the rule of militant and radical Islam?

These sort of questions and the more I assume will be checked and illuminated by the eminent participants.  Job and his three friends started a long discourse among themselves and asked   formidable questions to God. Their intense and courageous questioning moved God into their dialogue and God participated their conversation and gave his answers. Let it be the same for our congregation according to the brilliant promises of the Lord Jesus Christ ‘Two or three of you whenever come together in my name I will be among you’. Let us hear his consolation like the prophet Jeremiah heard the voice of the Lord after horrible disasters:
“Restrain your voice from weeping
and your eyes from tears,
for your work will be rewarded,”
declares the LORD.
“They will return from the land of the enemy.
17 So there is hope for your descendants,”
declares the LORD.
“Your children will return to their own land. (Jeremiah 31:16-17)

This meeting may not change many things in actuality but it will blow a wind of courage to our fragile hearts and it will be written in heaven as a sign of Christian love and will be registered in the book of Life on behalf of the Sant’Edigio Community and their sincere members as a good work done for the sake of Christ.
‘Truly I tell you, whatever you did for one of the least of these brothers and sisters of mine, you did for me.’ (Matthew 25:40)
And we will confess before the throne of the Lord, the righteous Judge that Sant’Egidio community did their best by setting a table of love for the least of their Christian brothers where we come together and shared a moment Christian love and peace and warmed up our hearts with hope to continue our earthly pilgrimage.
Thank you very much