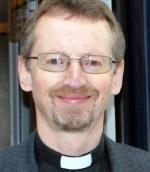 Walter Brueggemann, the Old Testament scholar, entitled his most recent bookReality, Grief, Hope: Three Urgent Prophetic Tasks. His messageis that the Christian church must help people take the difficult step of embracing painful reality; that we must grieve with the victims of this reality; and by proclaiming God’s gracious acts, we must be a beacon of hope for the future.
As a bishop of the church, my role is not to offer political solutions, but Christian insight in respect of the issues that confront us. So with Brueggemann in mind, I want to identify the reality about which we may be in denial; to acknowledge the grief that is present; and to point towards hope through God’s gracious acts.

1. Migration and reality
The first challenge is migration. We cannot escape it. It is in our newspapers and political discourse. Many British people seem to feel that the United Kingdom has been specially targeted by migrants. This is not so.Migration presents a problem across Europe,most acutelyin the Mediterranean states. But we each see the problem that is on our door step.
We have to confront reality. Reality is that:

Migration will not just go away. The painful reality is that we have to find learn to live with it.
“It is not right”, said an Ethiopian pastor interviewed on the BBC, “to go to the United Kingdom illegally… OK… But if it is not right, what are we supposed to do?”
The Christian church has to help the people of Europe grasp the reality that we will not solve the issues of migration just by building walls. However high the wall, there will always be a ladder long enough to reach over it.
The truth can be uncomfortable, but it is a Christian duty to help the people of Europe embrace the reality. It is easy to demonise the “other”. But migrants are not the” other”. “Migrants are not a threatening swarm, …but flesh and blood people. ”

2. Greece, victims and grief
Uncomfortable reality creates victims. Many of those victims are people who went along with what they were told were the self-evident truths on which society was built. Brueggemann challenges us to grieve with those whose world is collapsing, whose hopes about their place in the world turn out to be false.
If some images of truth in the world of high finance have turned out to be idolatrous, we also need to be aware of the victims, both direct and indirect.
The travails of Greece as it tries to negotiate its indebtedness have occupied much of the attention of the top leadership of the European Union.
What we must recognise is the reality of the grief and pain that that is being experienced. There is the grief of those who face very real economic hardship. A 30% reduction of GDP such as Greece has known does not work out as a 30% reduction for all. It is far, far, worse for some. I know from the first-hand experience of our Anglican parish in Athens something of the economic hardship that has been experienced. The Greek economic crisis involves real grief.
There is also the grief of those who find that the political arrangements that mattered to them have been overturned. The grief of those who feel that they have lost control of their own destiny. The grief of those who believe that they have gone to extraordinary extremes to help but have been demonised. The grief of those who worked for policies that they believed to be sound but which have turned out to be seriously flawed.
This grief is real and the church has to sit beside those who are in grief, to be willing to share it with them. Otherwise the church will be unable to speak either for the victims or to them.
To share in grief, is to show solidarity, it is to express compassion.
Solidarity and compassion help those in difficulty to find the courage to take charge of their own situation. Without them, nowords of hope that we can utter will be heard.
Pope Francis made an important speech to the European Parliament last November, in which he talked of the human being as an ‘individual in relationship’.We do not live alone.Individuals-in-relationship do not leave their neighbours to grieve alone.
Neither do they decline personal responsibility. It is easy enough to discount the problems of anonymous refugees or economically deprived European citizens – until we recognise them for what they are, not the unknown , perhaps threatening “other”, but human beings experiencing pain and grief because they have needs like our own.

Britain, Europe and words of hope
We can hardly avoid saying something about the place of the United Kingdom in the European Union – or not in it.
As someone who has lived for the last ten years on what we British like to refer to as “the continent”, I have become aware of howinsular British attitudes to our European partners can be. We often seem to want only access:to be in, but not of, the European project. To be constantly questioning our involvement. Can our best place really be nothing more than criticising from the sidelines?One trouble with criticising from the sidelines is that it is hard to get anyone to take you seriously.
In his speech, Pope Francis recalled Raphael’s frescoe of the School of Athens. This famous work symbolically presents the great sources of inspiration of European culture. In the centre are Plato and Aristotle, whose insights so enriched Christian understanding.Plato is pointing upwards, in a visionary appeal to what we might become: Aristotle, his hand extended, invites us to engage with the world as it is.
Perhaps Aristotle taught the British more than did Plato, for we are notoriously reluctant to engage with vision, more committed to dealing pragmaticallywith the world as it is. Many British people are unmoved by, indeed deeply sceptical of, the visionary aspects of the European project such as the commitment to “an ever closer union”.
British opinion tends to be more interested in the practicalities of the Internal Market than in political union. Yet I am assured by those who should know that successive British administrations have worked constructively on the vast majority of the business of the European Union and have an above average rating for correct implementation of their obligations. What is clear to me is that, in or out of the European Union, the United Kingdom is unlikely to abandon its pragmatism in favour of visionary grandeur.But wise pragmatism is not reducible to the pursuit of short term self-interest. Handling the problems that are to hand must be realistic, but it also needs vision.
In relation to migration, every player may have strong pragmatic reasons for not acting. But migrants do not go away. Even the slimmest agreement on how to share the burden of resettling asylum seekers at EU level, with some sort of voluntary burden sharing, failed in implementation.
Where is the vision? Where is the analysis that shows where our inaction is leading? While Germany makes plans to accommodate 800,000 migrants this year alone, and the front line states deal with issues that we witness daily in the media, where is the solidarity between neighbours and fellow- Member States of the European Union?
Part of our common European heritage from the School of Athens academy is the importance attached to virtue, and virtue ethics has undergone something of a revival recently.  So I ask: were virtues such as compassion and solidarity ever more necessary?
I mentioned earlier that British attitudes to the European Union may seem insular.Please forgive us for it! We are, after all, an island people.But I want to conclude with some famous words, from a British poet and divine of another age, who had a major influence on the civilised and civilising development of the Anglican church which I represent. These are a salutary reminder to my fellow-nationals, but with the voice of an island people, they speak of virtue that offers hope to all of Europe as it contemplates its future and to the Christian church in its prophetic ministry.

No man is an island entire of itself;
every man is a piece of the continent, a part of the main.
If a clod be washed away by the sea, Europe is the less,
as well as if a promontory were,
as well as any manner of thy friends or of thine own were.
Any man's death diminishes me, because I am involved in mankind. And therefore never send to knowfor whom the bell tolls;
it tolls for thee.