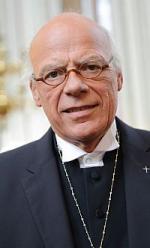 
This is a word of power, the world is longing to hear in these days: Let mutual love continue! More is not necessary to say. Don’t stop loving one another. The world seems to be on fire. Destruction, hatred and violence endanger mankind. The picture of thedead little boy at Turkish sea shore moves people all around the world: we have to stand up for peace again. We have to raise our voices for refugees and poor people. We have to encourage the leaders of the world to stop war and to open the borders of the free world.
In German the bible verse is translated: “Do not forget to be free for hospitality (Gastfreizu sein vergeßtnicht…)!”
Jesus declared us to be free for love. And that means: those, who are following him are not free torefusehospitality! As Christians we are not free not to welcome the refugees here in Europe. We are not really free to close our borders and doors. We are not free not to share what we have to live: love and peace, bred and money, time and houses. There is enough for all.

What the letter to the Hebrews presents is a very simple thing: hospitality is not only useful for the strangers knocking on our doors; it is useful for us all. It might be an angel standing in front of us, sitting next to us, talking to us. Don’t miss this chance! And indeed: God created us only little lower than himself! This shows howmuchGodvalues us. This term “a little lower than God” is the source for the dignity of every single person. The infinite value and sacrosanct dignity of human kind is not result of our achievements but of mercy. Because God looks at me with love, I am what I am: a loved and valuable child. Therefore we are not free to neglect hospitality. To refuse hospitality to strangers means to refuse God himself being with us!
Not neglecting hospitality is also useful for ourselves because we ourselves might be in prison, in danger, under violence: strangers in most parts of the world.
Because of God’s mercy: don’t feel free not to be merciful to the strangers.

But unfortunately, in the world we experience mercilessness without end. War and persecution, hatred and violence are the results if we distance ourselves from
God and don’t seethe others as God created them. At the moment there is nothing afflicting us more deeply in Europe than the steadily and dramatically increasing number of refugees who have to leave their homes because they are scared to death, because they are persecuted and fear for their lives and limbs.In their home countries they are humiliated. And this contempt is the opposite of grace and it drives them to take flight.

What they are looking for, is nothing but grace, nothing but the Lord’s face shining upon them. They do not seek wealth or adventure. They run and flee to regain their dignity. I am glad and grateful for all those in Europe, who give a friendly welcome to strangers, who open their hearts and doors for them. They reflect the grace of God and recognize in every stranger a person who is created a little lower than God himself. I thank Sant’Egidio for their worldwide efforts for the refugees and the miserable and I thank for their exemplary respect for the dignity of these uprooted people.

But far too often those people have toencounter mercilessness also here with us. In Germany refugee shelters are burning, refugees are insulted and debased. They are not recognized as fellow human beings but as trouble makers. What is the reason for this mercilessness? Sure there is a neo-Nazi scene in Europe and in Germany, people that hate everything foreign, people that want to elate themselves over other cultures. They dare to see the other lower than themselves. They want to exercise power, they mis-use the fears and worries of their fellow citizens for their own primitive power games.

But how does it happen that also usually apolitical people, normal citizens from the neighborhood join those hardcore xenophobes? How can it be that they also refuse the foreigners any welcome, any dignity and that they don’t want to see their plight. Very often those articulating the fear that their own culture might disappear don’t have the slighted idea about different cultures, don’t know any foreigners. But they are ridden by fear: fear of the refugee, fear of the stranger in general, fear of the future. Those strangers become the scapegoats for their discontent with their own lives, for their hatred of their own culture that shows them little respect. Many of those people never experienced the grace of being loved, accepted and wanted. Many of those are “homeless” themselves, they are not sure what their place in society is.

Only those you know grace and mercy by heart can be merciful. Only the one loved can love. God liberates into the freedom to live. God wants to use us for his works of mercy, us the beloved children of God.
This is a great task for the  Christians churches and all world religions: We have to respect each other and support each other so that we stand up against any form of mercilessness and its consequences: hatred, violence and displacement. We who know God’s hospitality, his mercy and unfounded love are called and able to use our freedom and to welcome those who do not know where to turn to.

“Let mutual love continue. Do not neglect to show hospitality to strangers…”