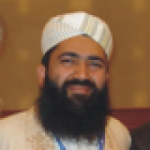 First of all I am thankful to the blessings of Almighty Allah that has chosen me “to contribute for the good”. I am also thankful to the Community of St Egidio, its Management and Leadership; their sincere efforts and initiative, which we see today in shape of this beautiful bunch- the pious and spiritual gathering. I salute to its leadership.
Today the topic which has been given to me is “Prayer as a source of Peace”.
I will try my best to talk about in the light of the Holy Quran, Islamic traditions and in the end I will suggest some recommendations and submissions as well.

I am very much convinced about importance of initiatives and efforts like Peace Conferences, Seminars, dialogues, agreements and pacts, tolerance, and negotiations for the desired objective of “global peace” yet the prayer for peace holds its own place and recognition. These initiatives and efforts are the results of the prayers of the religious scholars, religious gatherings and communities.
In this connection the Quranic supplication and prayer of the Prophet Abraham (AS) is worth sharing when He said,

In all the revealed religions the importance and effect of prayer is understood and recognized. However, in Islam the prayer has been declared as the “crux of all worships”.  And the Muslims are bound to utter this supplication of the Prophet Muhammad (Peace Be Upon Him);

“Oh God, You are Peace, From You comes Peace, To you returns Peace. Revive us with a salutation of Peace and lead us to your abode of Peace.”

I am very much encouraged that this beautiful meeting; the galaxy of the luminaries is the result of sincere efforts and heartiest prayers.
The brave and courageous people of Albania!! We have brought with us the greetings and blessings, respect, human dignity, peace love and harmony. This spiritual and blessed gathering bound us to globalize this holy message across the world.
I very humbly dare to divert the kind attention of the audience towards some unwanted tragedies that took place in Pakistan. The first is about the Kot Radha Kishan incident where a Christian couple was set ablaze on fire and unfortunately the tragedy was given a religious touch. Upon our research and investigation, it was found that it was an issue between the factory owner and the laborer being the Christian. We went there and met with bereaved family and convened a meeting in the local church and assured them the arrest of the culprits.
The second incident was the bomb blast in the churches of Youhannaabad-a Christian village. We understand that it was very challenging and tragic situation, however, the factual scenario of Pakistan is not indifferent. During the course of the war on terror the nation has suffered a lot; mosques, Imam Bargah, shrine, religious and political gatherings, missionary centres, police stations, army personals and even schools, hospitals had not been spared. Dec, 16 2014 is the black day in the history of Pakistan when innocent children of Army Public School Peshawar was attacked by terrorist and about 400 students were targeted. This was the turning point; Pakistan Army decided to wage a decisive operation named as Zarb e Aazab was launched against the terrorists. And it was unanimously declared that the operation will last till the last terrorist.
In this connection solidarity and prayer days were observed to console the bereaved families of effected and Pakistan Army personnel.

Islam is the  religion of peace and well beings. The word Islam is a substance of Salam or Muslim and its meaning is submission and that is the true peace. Islam is the name of this well being and today the world is in great need of the same. Islam is not only  a religion; its complete code of life.
Islam declares one murder, the murder of whole humanity and there is no difference or second opinion between Islam and other religions on this issue

I think it necessary to inform this distinguished house regarding two important initiatives . The first one when  I was visiting Rome-Italy and met with Pope in the Vatican City-he appreciated our work in Pakistan and prayed for us and for our peace work. Secondly, when the King of Saudi Arabia Khadim ul Haramainal Shareefain Malik Abdullah Bin Abdul Aziz inaugurated the Makkah Interfaith Conference and also conveyed the message to the world , this was really an important initiative in the Islamic World.
Today the world is faced with these challenges because of the scarcity of the resources . Religion is not  source  of conflicts. Religion must not be involved in these conflicts and issues. Religion is always giving the message of peace and love. And we must focus on supplications and prayer as the source of Peace at all occasions.  We can globalize this message through the followers of each religion that they should adopt the way of respect, tolerance and  patience for other religions.
The religious leaders should make a common inter-religious dialogue platform, to work on theses lines for the welfare of the humanity and should develop a neat and clean culture and every differences should be adjusted.

In the end I am thankful to the leadership of the Community of St Egidio  and all the Managers of the Conference and Respected Prof. Dr. Andrre Ricarde  working as a bridge and connecting diverse communities for  the greater cause of Peace and Love.
Almighty Allah I beg that

May Peace Prevail On Earth!  Amen!
Thank you very much