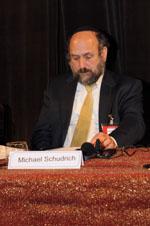 We are gathered here again today to remember the  most horrible place on earth ever to exist, the German Nazi death camp of Auschwitz-Birkenau.  This statement needs no explanation.  We are now 64 years later since its liberation. Why do we need still to remember?  What difference does it make?  So many other tragedies have occured in world history and even other genocides have been perpetrated since WWII.  Why do we, the humans of this world, have a fundemental obligation to specifically remember Auschwitz?

The German genocide of the Jews during WWII was the largest, most ocmplete genocide ever committed in world history.  6,000,000 Jews were murdered only because they were born Jewish.  80% of European Jewry was killed, 1/3 of world Jewry.  And Auschwitz is the place were the largest number of Jews met their deaths.  Being  the worst example of genocide creates an obligation on every human being to remember and to repeat to others what we are capable of doing ot each other.

Why does God in Dt. 25:17  instruct us to ... Remember that which Amelek did to you on your way out of Egypt." Why remember this cruel attack on the Jewish people.  Isn’t it better just to forget?  Why remember cruelty, pain?

Every time we meet, every time even one individual remembers the German Nazi genocide, talks about the Holocaust, recalls the murder of Jews, Poles, Romi and others, every time we do that, we are one step farther away from ever letting this happen again.  Every prayer, every lecture, every word spoken out against what happend here in Auschwitz and still, on a smaller scale, happens in other places like Darfur, we create the chance that maybe maybe it will not happen again.  Every occassion in which we ...ZACHOR", remember, we are pusihng thw world one step away from repeating the horrors of Auschwitz.

With God’s help, this will not only be our hope, it will also be our truth.