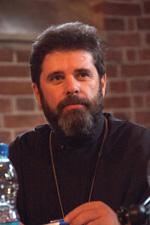 The world today presents a variety of challenges for the whole human community. The Christian Churches cannot exclude themselves from these challenges. They must confront them, not merely to defend themselves from them, as has been the case so often, but in order to find original and creative solutions as part of their global responsibility.

One of the many problems of present time for Europe is the emigration, a complex theme that involves different factors and actors. Unfortunately, our societies have lost many traditional values, creating a huge vacuum, which often breeds a fear of outsiders and increases nationalistic feelings. National sentiments can cause such sinful phenomena as xenophobia and inter-ethnic enmity, leading often to the restriction of the rights of individuals and nations, persecutions, and other manifestations of violence.

Xenophobia is derived from the Greek words xeno, meaning "foreigner," or "stranger," and phobia, meaning fear. Between the stranger and those around him there is reciprocal tension. In all people the stranger is originally an enemy; this is why many nations have only a single word for both. But the word xenos has the meaning of guest also. The basic sense of hostis, too, is that of the enemy, but the same word is used for host – guest. So, the words hospitality and hostile have the same root. The difference is not on the words but in the attitude towards the xenos, hostis. If we will see the stranger –xenos, hostis with fear he will be our enemy and that is Xenophobia that phobic attitude toward foreigners. But treated with love that is Philoxenia-the love for the stranger, where the stranger ceases to be an enemy, he is now a friend. The difference between Xenophobia and Philoxenia is the difference between hatred and love to the strangers.

This thought was not new. Among the Jews we find the saying that hospitality to foreign travelers gives a share in the future world even for idolaters; for hospitality is one of the works whose interest is paid in this world and the capital in the world to come. The same idea is in Islam, also. In Parsee religion, too, hospitality to the stranger is a criterion for the eternal destiny of the soul. In the ancient Greek religion in the other life men are punished for the wrongs done to foreigners.

For the early Christians agape-love always implies philoxenia. Hence the later plays a significant role in ethical instruction. According to Rom.12:13, 1 Pt. 4:8, and many other apostolic and post-apostolic writings philoxenia is inseparable from philadelphia and it is included in the lists of virtues. The basic motive for the early Christian philoxenia is agape-love and it is seen as a divine charisma of believers. Furthermore, in the Epistle to the Hebrews. (13:2) the exhortation for constant philoxenia it is not for the reward, but to the possibility of contact with the metaphysical world which philoxenia- hospitality gives, and of course, to the equally possibility of throwing away this contact. Unfortunately, the world today lacks precisely that contact with the other dimension of life, (or better saying the true dimension of live), and so, this divorce with divine has impoverished our lives and has turned our societies selfish, cynical, thinking that only with power of their cold minds they can find solutions for their own problems, without the divine presence or help. The same old lie goes on, thinking and believing that we can build our life and our future only by our own efforts, without God, and so closing the door for His intervention.

Today, more than ever, it is the need for the presence of Spirit of God and today religion should play the same role, too, because we face the increasing phenomenon of Xenophobia almost in all countries of Europe. According to an opinion poll conducted recently nearly one out of every three European Union citizens describe themselves as ‘quite racist’ or ‘very racist’, and more than one in five also agrees with the view that all non-EU immigrants should be sent back to their country of origin. "Phobia in this context is not meant in the clinical sense but rather refers to a part of the network of racist ideologies predicated on discriminatory discourse and practice." (Blackwell Encyclopedia of Sociology)

Undoubtedly, we do not have the legislative power and for sure we lack the expertise to find solutions for all the problems, but we have a precious treasure in our doctrine and our faith and we can give a very important contribution, teaching our people and spreading the right spirit, because many problems can not be solved only technically, they require the right will, also. We can have the right lows, but without the right spirit they will not help. You can have the right faith but if this is in hands of wrong people it will be lost and will be no profit from it. In this, we must be rooted in our doctrine, history, and rich tradition without ceasing to be a creative, living organism, invigorated by the Holy Spirit, who has inspired and continues to inspire our life.

Christian anthropology is based upon divine revelation which says that "God created man in his own image and likeness (Gen. 1:26, 27; 5:1). The incarnation of the Lord and his soteriological work demonstrate that God is not the God of the Jews alone, but also of the Gentiles (Rom. 3:29). The Church which is built upon this foundation does not divide people on either national or class grounds: in her "there is neither Greek, nor Jew, circumcision nor uncircumcision, Barbarian, Scythian, bond nor free: but Christ is all, and in all" (Col. 3:11). Hence, the Church by her very nature is universal and, therefore, supranational. In the Church "there is no difference between the Jew and the Greek" (Rom.10:12). This is the basis for the Christian understanding of nation and race. The witness of Holy Scripture as well as various apostolic and post-apostolic texts are evidence of the self-understanding of the early Church.

In front of this increasing phobia towards foreigners the Christian Churches should not be silent. The Church should have a strong prophetic voice against Xenophobia, and she must fight unswervingly against this demon of hatred. The prophetic role of the Church is to say what God is saying. In our times, where lies and half-truths rule, there is a desperate need for the prophetic role of the church; there is a desperate need for lives lived "in spirit and in truth." Sometimes the true faith is fettered by the chains of compromise—not telling the truth because it costs. Living with the truth is not easy, but it is the only way to be ontologically free. Often the truth does not coincide with what people want to hear. Christianity is not to entertain people, but to save them. The prophetic role of the church is to say what God is saying. We know from the Holy Scriptures how costly the phrase, "Thus says the Lord," was for the prophets. All of them were persecuted and killed because they said, "Thus says the Lord," because they said the words of God. The kings, rulers, priests, and people wanted the prophets to say only what they wanted to hear, but the prophets said what the Lord was saying. The Scriptures also tell us that there were men who prophesied only what the king and the people wanted to hear. These were the false prophets. Their words were applauded and welcomed for a while, but in the end their words were lost because the truth was not in them. It was the boldness of the true prophets that kept alive the flame of the truth.

Unfortunately, often today the prophetic role is betrayed for different reasons—from fear, a lack of love, lukewarmness of faith, self-interest of different groups, or ethnic interests—always loving the glory of man more than the glory of God. Words are spoken that are welcomed for a short time, but in the end, these will die because in them there is no life and truth—turning us into false prophets. Christ cannot be played with. We will be either prophets of the Most High, or false prophets. There is no middle way. The truth can be persecuted, but it will live. Its words are eternal because, "Thus says the Lord." A lukewarm faith cannot save. By not telling the truth to others, we show that we don’t love them. The greatest friend is the one who pushes us toward salvation, and not the one who says sweet words to us. It is only the truth that saves and frees.

On the basis of a Christian anthropology that believes that God "has made from one blood every nation of men" (Acts 17:26), the Church sees that human unity is deeper, and ethnic divisions superficial and nonessential. The only legitimate division will occur when "all the nation will be gathered before Him, and He will separate them one from another, as a shepherd divides his sheep from goats." (Matt. 25:32).