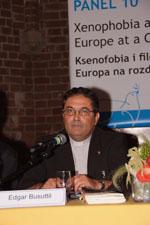 1. Private snapshots on multiple identities:  Encountering the Other at home and abroad.

Late June 2000. On the train from Lavinio to the centre of Rome I hardly ever meet anyone I know, … I usually spent my journeys to and from Rome reading text books and study notes.  In two days' time my two year stay in Rome will draw to an end and I will head South again to the island of Malta. In fact, today I'm going to the faculty office at Via del Castro Pretorio to hand in copies of my dissertation.   The train from Nettuno enters Lavinio station.  I look for an empty seat on the second car which I usually board, crowded and noisy as usual, and take out a copy of Dickens' Pickwick Papers from my back pack.  I try to  suppress the giggles as I go through Mr Pickwick's misfortunes.  As my eyes drift away from the pages and settle on the dark brown railing above the windows, I am stunned.  Maltese sei una merda.  It was written in white with correcting fluid.  I look around me to see if anyone has noticed my reaction.  I close the book.  My fingers leave humid stains on the pages.  I reach Rome, walk briskly to Via del Castro Pretorio, leave the three copies of my dissertation at the faculty office, don't even bother to say goodbye to the young man at the reception desk, walk back to Roma Termini, and board the now deserted second car of the train returning to Nettuno.  I see that the dreaded message is still there, glaringly white over the dark brown hand rail.  I walk on to the fourth car through the connecting passageways.  Back in Lavinio I pack my few belongings.  My phone rings.  It's Paolo.  “Next Monday I will drive you to Fiumicino Airport so that you won't have to wake up too early.”  “That's great.”  He somehow senses that I'm in low spirits and tries to brighten me up.  “You know what?  When you're gone, the grey garbage bag in my kitchen and the wheelie bin at the corner will keep reminding me of you!”

Malta: Sometime in June 2007.  I am attending a seminar at a hotel in Sliema this morning. I'm not very familiar with this part of the island…It's so strange that I've never been here in my life, Malta being such a small island.  I walk uphill and turn into a straight road.  One side of the road is lined with parked cars.  The other side of the road is full of fine white dust.  A long trench running along the whole length of the road had recently been filled in with concrete awaiting to be patched up with tarmac.  The white silent street under an already hot sun, is deserted.  Only one empty shop in the corner.  The only sound to be heard is that of a broom hitting the hot tarmac.  A tall black young man is slowly sweeping the street, gathering the white dust in small mounds here and there.  As I walk past him I look at him from the corner of my eyes.  As he warily takes his eyes off the ground, his gaze meets mine.  Small red veins run through his yellow, silent eyes.  Small drops of sweat shine off his bare hands and shoulders.  My feet feel like wanting to stop by... My lips look like they want to utter inaudible words...  But nothing seems to push the activation button in my mind.  My feet plod on.

2. Pondering upon the snapshots: Encountering the Other in our midst, opening up to possible new worlds.

Illegal immigrants, klandestini, economic migrants, refugees, blacks, Africans, terrorists, parasites living on our backs...  These quotes from letters to the editor of Maltese newspapers seem to be very poor attempts to objectify the Other among us.  The Other, however, is quite elusive, and very often has transient multiple personalities, depending on the setting, the time and the place.  Hailing from Malta I may be a Southerner in the eyes of a Neapolitan or of two girls from Potenza.  They in their turn are considered as Southerners by their Roman neighbours in the housing estate of Lavinio.  I myself would be considered as a Northerner the by Sub-saharian boat people reaching our shores.

The Other, coming in boat loads from the south, might be objectively different from us who generally inhabit these islands in the middle of the Mediterranean, because of the colour of his skin, the way he eats, even the way he practises his Christian religion.  Our relationship with him can take various forms.

The first can be one of rejection when the Other is considered as a major threat to our feeble ego.  When this happens, we may decide to force him back to the shores of Libya.

What happens when these boat people are returned to Libya: A country that has not signed the Geneva Convention? Italian journalist Gabriele del Grande has been to Libya and has made a very revealing film on the way irregular immigrants are treated there; This is a short quote from the film;

In 2005, the former director of the Italian secret service (SISDe), Prefect Mario Mori, informed the Italian Parliament: "Undocumented migrants in Libya are caught like dogs” and put in centers so overcrowded that “policemen must wear a dust mask on the mouth because of the nauseating odors". But at the Ministry of Interior they already knew it. Actually since 2004 the Italian police is training their Libyan colleagues in fighting immigration. And some high officials of the Ministry of Interior, have visited the detention centers in Libya at different times, including that in Kufrah. But silence was imposed over the reality. The same hypocrisy has been shown by the European Union. In a report of 2004, the European Commission defined the conditions of detention camps in Libya "difficult" but at the end "acceptable in the light of the general context". Three years later, in May 2007, a delegation of Frontex visited the south of Libya, including the prison of Kufrah, to lay the foundations for a future cooperation. Try to guess what they wrote: “We appreciated both the diversity as the vastness of the desert". Not a single word instead about the conditions of the prisoners. An oversight?

Another alternative is for us, with extreme caution to opt to tolerate the irregular immigrant among us and maybe get to know him from a distance, just enough to be able to objectify him in order to control him.  Knowledge of the Other in this sense becomes a cultural construct based on culturally-biased conceptual frameworks aimed at making the Other comprehensible to us on our own terms, terms that are distorted by fear of the different Other who is perceived as a threat of unknown consequences.  What follows is an attempt to annihilate the Other by coercing him to become like us. We will reluctantly live with the fact that this Other from the distant south cannot change the colour of his skin.  But the least he could do to appease us is to adopt our language, our life style, our frame of mind... In short we will expect him to annihilate himself.  At best he will become an easily predictable part of the reality that surrounds us, prone to exploitation, visible but silent, doing his utmost to accommodate our fears.  At worst he will become a scapegoat for all our ills.  The Libyan treatment of Ethiopian and Eritrean Christian immigrants,  the Maltese treatment of African boat people in detention, or simply writing Blacks Out! on a street corner, are attempts, in varying degrees on the atrocity scale, to annihilate the unknown Other arriving from outside.

However, there is a third way.  Emanuel Levinas argues that the face of the Other has something of the Eternal in it.  The face of the Other, unknown and stranger to me, is turned towards eternity, and ultimately towards God.  It poses upon me the imperative: do not kill me.  It hands me with an a priori call for justice.  The gaze of the Other upon me places me in a position of responsibility towards him.  Extrapolating from Kierkegaard's vision of the self as potentially positioning himself before God who in turn becomes his mirror image projected into infinity, the self only becomes engaged in the eternal process of becoming when he opens himself up to the presence of the Other in his life.  Living up to his responsibility towards the Other, the self will constitute itself as an ethical being, shedding its self-suffocating egocentricity while committing itself to the well-being of the Other.  Simply put, I become an authentic self well placed on the path toward self fulfilment, with my face upon God the eternally loving, my mirror image projected into eternity, when I concretely commit myself to ensure that the Other has the same right.  Not only, but the Other's right, in the thought of Levinas, has a precedence of any other right I may have, and my commitment to the self-fulfilment of the Other becomes a precondition for my own self-fulfilment.  How does this translate itself into everyday life?  Don Milani writes:

The right goal is to give oneself to others.  And in this century, how can you love if not through politics, the trade union, and the school? We are sovereign. It's no more the     time for begging, but for making choices.  Against class-conscious people like you,     against hunger, illiteracy, racism, colonial wars.

The encounter with the Other thus is not a call for what Freire calls “an armchair revolution”, but a positive disturbance that awakens us to answer the call of our Maker for human fulfilment, rolling  up our sleeves and striving for social justice with true generosity which, according to Freire, consists precisely in fighting to destroy the causes which nourish     false charity.  False     charity constrains the fearful and subdued, the 'rejects of life', to extend their    trembling hands.  Real generosity lies in  striving so that those hands –     whether of     individuals or entire peoples – need be extended less and less in supplication, so that     more and more they become human hands which work and, by working transform     the world.

The fear of the “Other” often hides behind the guise of religion. Religions, when they are true to themselves, set us free from fear. Faith opens paths for dialogue and sharing, for the discovery of ourselves and of other. Our faith commits us to this.

Let us Europeans not repeat the terrible mistakes we committed in 1939. Xenophobia leads nowhere except to senseless tragedy. The time is ripe to act with courage.  The call to “love one another as I have loved you” has never been so urgent.  The call is for us to “communicate with everyone, getting to know new people and new problems, laugh at the sacred frontiers of the the fatherlands.”   In short, to move beyond our fears and open up to new possibilities for our humanization.