Speech of His Beatitude John X 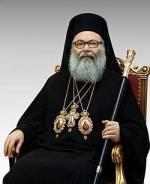 Greek Orthodox Patriarch of Antioch and All the East
biographie
Beloved audience,
First of all, I would like to thank the organizers of this conference, the Brotherhood of Saint Egidio, with whom I had the chance to meet in Rome four years ago. I send you heartfelt greetings of peace from the faithful of the Church of Antioch.
On this day of the year 2001, some people were terribly deceived and blinded, that they kidnapped planes and passengers, causing with these planes an ignominious terrorist attack in the United States, an event that made all the nations feel a crying shame.
Today, after exactly sixteen years, we find this “octopus” striking the entire planet, hiding everywhere. Today, we are brought together in this place, on the same date, coming from different social and religious backgrounds, to stress that we all long to the olive branch. On that day, some imagined that they were knocking on heaven’s door when they made the plane collide into the skyscrapers; they did not realize that they were only touching the abyssal darkness for taking innocent lives woven by God, made from His majesty and love.
In our days, it is most unfortunate to see this plague devastating many a region. We see big and small countries agonizing under its yoke, investing in its name, or begging it for mercy. We watch societies suffering dire death, displacement, violence, and the woes of war under polished names that have nothing to do with the truth.
These words said today by myself, the Patriarch of Antioch, might seem pessimistic, but there could not be a less willful expression to describe the sighs of his children’s hearts in these circumstances. In the beginning of year 2011, some people started what was called the Arabic Spring. I can assure you that, as Christians of the Levant, all that we ever saw of that “spring” was the anemone red of our son’s, our elderly’s, and our martyrs’ blood. From its first moments, they only saw the desperation of wars: violence, displacement, kidnapping, dying on sea coasts, terrorism, extremist movements, destroying churches, targeting people living safely, and dismantling states and systems.
All this, and the world boasts, or simply ignores what is happening, knowingly or unknowingly. All this and the world either falls down or compromises. It blockades food and bountifully dispenses weapons. Sometimes it really cries, and sometimes it turns on the waterworks.
The unique role played by the Church of Antioch in the heart of this wounded Levant, that is very dear to us, is to be the most important bridge between East and West. As Antiochian Christians, we drew our Christianity from the words of the Apostles. We were baptized first with the Baptism of Christ; in the name of Christ we baptized Antioch and the surroundings. It is not through ways of teachings and philosophies that we knew Christ and kept Him in our hearts, but through strong will, ancientness, and the authentic history. We converted into Christianity long before the latter became the religion of an empire. We suck faith with our milk, and were initiated in Christian existence together with a passionate love for our homeland. Later on, as Antiochian Christians, we spoke Arabic. In addition to geography, this language introduced us to Arabic civilization, and initiated us to better understand Islam and our Muslim brothers and sisters. Because of all these factors, the Church of Antioch and the Antiochian Christians in general are considered the bridge of harmony and dialogue between East and West, Europe and Asia, Christianity and Islam and all other religions. They were the first to have witnessed an authentic brotherly relationship with all denominations, despite all the ups and downs of history in the ancient Levant. This is a unique role played by the Church of Antioch and of the Christian presence in the Middle East. It is a role to which we draw the attention of the world, nowadays when the side of Christ is left to bleed, wounded by the spear of terrorism that assaults the Middle East, causing a blood flow of exiled Christians, together with other communities, and many others woes. No matter how horrible, these will not uproot us away from our homeland, which is our heart and soul.
I am here in the heart of Europe to share the sighs of my people with those who hear me from every kind of culture and nation, and to make with all of you, dear brothers and sisters, a sincere call for peace, a call which I place in the ears of this world’s politicians and great powers. Syria has had enough of the wars on its land! Syria has had enough of everyone getting dim and ignoring the facts, satisfied with enthralling false information from the media.
I am here to put forth and whisper into the ears of Christian Europe a handful of the Levantine Christian’s agony, together with their brothers of other communities.  Among the killing and displacement that these have suffered because of the present atrocious times is the case of our brothers the Bishops of Aleppo John Ibrahim and Paul Yazigi of the Syrian and Greek Orthodox communities, who have been kidnapped more than four years now in the absence of any information and an international suspicious silence.
Today we call for the peace in Syria and for the stability in Lebanon, in the Middle East and in the whole world, who are paying a very high price, unfortunately, for a restless and wiggly terrorism.
Lord, grant us the spirit of Your righteousness peace, to descend on us as a balm for the long-awaited and sought earthly peace.