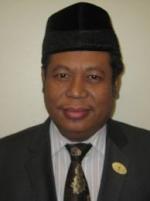 Dear Delegates
Greetings and may the peace of God be with you.

I am greatly honoured to speak to you today on the important topic of “ Peace  is the Future “ which has brought together distinguished leaders from around the world to discuss  about “ Religion and the Dignity of Human life”, actually  this is an important topic not only for moslem countries in Asia, but everywhere in the world.

In our daily life, we can not be separated from the state and nation, because it is a part of our dignity in our life,  it is necessary for me to say that basically in the world, especially in Asia, there are three kinds of state models. The first model, the state  and religion are separated, no relation between religion and with the state.

The Second  is  the state and religion converge or united, the state established from religious foundations, and in the name of one religion, then the state is called religion state.

The third model, is both religion and state are stand alone, but  the religious values  are united and used as a foundation of life, such as two sides of a coin, can be seen and felt.

Refer to the second model of this country, which is fused and unified between religion and the state, is a model country that should be able to unite the nation views of  the religious understanding. This model is not easy to put it together, if the people have a different understanding, different religions, different faiths, different sects,  different views, usually, this model state requires a leader who can use an iron hand to incorporate and unite them.

The third model is a state that can unify the values of religion, although there are  different religions, different streams, different sects, if the foundation rules of the state agreed and it derived from the universal religious values "unity in diversity" then however the country is not called as a religion state, but the state with religion values, because the rules are not contrary with the teachings of religion.

Based on to the third model,  I will present an example and a model of my own country Indonesia, which we call Pancasila state, not a religious state but a country which is accepted to all religions.

My homeland of Indonesia, which is NU as a founder is an archipelago in Southeast Asia consisting of 17,000 islands. Indonesia's 240 million people make it the fourth-most populous nation in the world (after China, India and the United States).

At least 300 different ethnic groups have been counted in Indonesia and there are an estimated 737 living local languages. Although Muslims represent a large majority of Indonesian people, we have significant minorities of Protestant, Roman Catholic, Hindu, and other indigenous faiths.

Considering this diversity, the Muslim majority has a particular responsibility to be an agent of peace, to acknowledge differences in experience and outlook, and to seek accommodation through the tenets of our faith that emphasize tolerance and respect for others.

As the country’s largest Muslim organization, Nahdlatul Ulama (NU) has a singular role to foster tolerance and respect, not just as an abstract principle but as an ethic than can take root in the hearts of Indonesian Muslims.

Since the establishment of the beloved Republic of Indonesia, NU has accepted the principle of Pancasila as a state ideology. For it contains not only substantive religious values, but also a very deep expression rooted in Indonesian culture.

Pancasila consists of two Sanskrit words, "panca" meaning five, and "sila" meaning principles. It comprises five principles held to be inseparable and interrelated, and which have proven to bridge the many differences among Indonesian people:

Pancasila has become a meeting point, especially in the fierce debates between those expecting Indonesia to be a secular state, and those expecting it as an Islamic one, considering that Indonesia is a predominantly Muslim country.

Holding diverse social groups with different cultures and faiths together in a sustainable way is a heavy task. The key ingredient of a successful multi-cultural and multi-faith society, according to NU’s opinion, is moderation, which is the opposite of extremism.

The teaching of moderation ( Tawasuth ) in Islam is very clear. Islam emphasizes moderation and balance in every dimension of human conduct. The Qur'an says: “We made you to be the community of middle path (Al-Baqarah:143). Prophet Muhammad, Peace be Upon Him, said: “Beware of excessiveness in religion. People before you have perished as a result of excessiveness.”

Moderation could close the gap between conscience and doctrine, between what can be achieved and what should be achieved, and between rights and responsibilities. Together with other virtues, namely peace ( Salam, silm, Islam ), justice ( Al-‘adalah ), freedom ( Al-huriyah ), tolerance ( Tasamuh ), balance ( Tawazun ), consultation ( Ash-shura ) , and equality ( al-musawa ) , moderation will make peoples free  from suffering and guide them to real happiness here on earth and in the day after. This is the dignity of human life which is taught by religion.