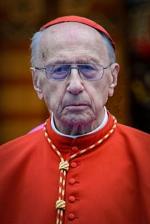 If I accepted to address you it is because I contemplate you under the sun of God, enlightened by the prayer which many of you have just celebrated, each one according to his or her religion and conscience. My strength is your strength. My heart is your heart. I am simply one among you. And together with you I cry out my vivid thanks to the Community of Sant’Egidio which since 1986 has relentlessly been expanding the “Spirit of Assisi” everywhere, this spirit of prayer and reconciliation, which a courageous pope made come down from the city of Saint Francis, the “Poverello”.
And tonight Sarajevo has this honor or rather this task, and meets the desire of the Grand Mufti Cerić, the great Cardinal Puljić, and also of the large Serbian Orthodox Community and the ancient Jewish Community.
Sarajevo, that time I passed through the eight-hundred-meter long and one meter and a half large tunnel descending from the mount Igman under the airport, to pay you a visit in the name of John Paul II, the city being in a total blockade. And I prayed with you on Friday in a Mosque, on Saturday in a Synagogue, on Sunday in the Orthodox Cathedral and then in the Catholic Cathedral.
Sarajevo, I tell you today – have courage! Courage! Learn again to live together, to look at one another without taking side as if everyone were completely new and fresh. Courage to make this land habitable for people they are brothers and loved by the same Father of the human family.
Sarajevo, you are right to be very proud of your past made of religious tolerance and cultural exchange. Live again what you really are for the benefit of all peoples and all religions.
Sarajevo, Sarajevo, I tell you: God will judge humanity on what happens under your eyes.
Sarajevo, I ask you: give now your hand to your neighbor whoever he is, and together raise your united hands to God. Thank you.