Contribution of Puig i Tarrech 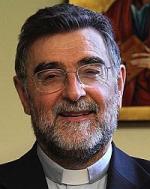 Why should we question ourselves about gratuitousness in the global market we live in? Isn’t there a contradiction between the question of gratuitousness and the reality of a world that moves in the wake of the market, that puts people in the frame of earnings and profits? Every good of any kind has become a commercial good. It seems as if all that exists is meant to be bought, to be sold, to be part of the economy. It seems as if all things are just commercial goods, as if the world is one big market place. Life is no longer considered in terms of needs but in terms of desires. What matters is the charm of an object that is presented to me in a desirable way and that attracts me – and to often it is desirable! So an irrepressible desire to possess it awakens in me. Actually I don’t know if this object suits me or whether I really need it. I don’t know whether my desire is the fruit of my freedom or if it is the fascination that has created an uneasiness in me. I want it, and that’s it! It has to be mine, no further discussion!

The world as a global market has become the realm of desires, of secret demands, of unspeakable desires. In a world of people who are proud to have achieved freedom of choices and actions – after so many generations that would have felt themselves oppressed by social institutions of all kinds – the dark forces of desire have invaded our minds, and no one dares to denounce their dictatorship. Desire becomes the mater of the house, who feels strong, decides, condemns and saves. And who has no competitors. The world as a global market uses desire. It has turned it into an irreplaceable principle. This world knows that desire acts like the motor of a world that likes false faces but often hides the true faces of life, a world that seems to be interested in the heart but employs a calculated ambiguity towards the feelings of persons.

In the world as a market the poor feel lost. For a world that looks for profit, they are either instruments of the production of goods or its consumers. We are getting into an unstoppable spiral without exit that imprisons the weak without giving them a possibility to escape. In fact, in the global market our world has become, the poor often live in resignation, as if there is no possible alternative, as if all dreams on earth are gone. We all seem to have to cope on our own. The poor have to carry the weight of their misfortune without regretting to much. The world as a global market does not know how to cure their wounds and sores. This world is always working whereas the poor do not produce anything, they do not contribute to the common good. They are being tolerated but at the same time considered a useless burden in a society in which profit should have no limits.
But the disorientation of the poor is not so different from the disorientation of all people. The world as a market makes people loose their roots and their identity. You get used to do a job that does not cheer you up, on the contrary it makes you tired and can even give you a hard time. You get used to have relations based on banalities and superficialities that do not build true friendship. You get used to loneliness and you think that this is a part the world as a market, a world in which people are just “consumers” and sometimes “customers”. This world demands efforts but gives its inhabitants disillusion and sadness. There is a hardness that invades people and makes the hard. There’s a lack of compassion that seeps into the hearts, empties the spirits and dries up the souls. The world market makes everything flat, reduces the energies – even if it talks a lot about energy and vitality! – and promotes individualism in the name of the claim for personal freedom. In one word: the world as a global market is in need of salvation! Who will offer it?

The answer is gratuitousness. Only gratuitousness is capable of save this world from its internal contradictions, its incapacities, its coldness. The bible book of Proverbs refers to Lady Wisdom who prepares a banquet with succulent food and good wines and invites those who walk along the town streets and squares to come in and take place at her table. Food will be offered to all without anything being asked. The banquet of Lady Wisdom is the banquet of gratuitousness, of a constructive gratuitousness as it is made of love. No one has to fear a bad intention. Lady Wisdom is so convinced of her generosity that in this town she establishes giving as a law, gratuitousness as a rule of conduct, invitation as a fundamental statute.
The biblical text tells that Lady Wisdom – or maybe we should call her Lady Gratuitousness! – looks out the window and speaks to anyone without exception. Her invitation is universal, global, without limits or conditions. Those who pass her house can be citizens of the town but also strangers, poor or rich, it can be the happiest or the saddest among people. Lady Gratuitousness sets no conditions to anyone, does not exclude anyone of those who want to listen.  Only one thing is required: the willingness to listen, to answer to her invitation, to understand  that this banquet is so important because it only ask to understand that it is being offered for free, out of friendship. Gratuitousness has to be furnished with friendship. A person who is your friend understands what it means to give and receive without there being any interest behind this exchange. Friendship does not count nor investigate, does not control or interrogate, does not complain or get angry. By inviting everyone to her banquet. Lady Gratuitousness opens her house for a great friendship.

Those who find themselves within the world as a market – and we are all in this condition – have received an unexpected and extraordinary invitation. We even thought it might never arrive. But in the heart of the city, built according to the laws of the world that is like a market, Lady Gratuitousness makes a surprising appeal, which implies a total change of the rules. In a world where everything is measured according to the laws of the advantage, a courageous woman – also exposing herself to the risk of being misunderstood – starts a new relationship with those who want to go beyond the individualistic desires and accept to sit side by side at the shared table of gratuitousness. They may ask themselves what caused this behavior in Lady Gratuitousness. They will not get any answer. In front of the desire that rises from my “I” and my little choices, there is another desire. It is the desire that rejoices when seeing an “us”, a “we”, which affirms itself in a world of lonely and sad people. Before a desire that is subservient to the world as a market, where the first principle is the separation from the other, shines the desire that rests on the gratuitousness and is realized by seeing people being united.

Thus there is a duel between two desires, the one rising from gratuitousness that certainly leads to life and the one rising from interests that carries the seed of death. Therefore the world as a market is stuck with a dilemma, on a crossroads. Because of the appeal of Lady Gratuitousness it is forced to make a choice. Most of all, it should not look back. The novelty of a banquet that is offered to everyone introduces a new desire: the desire to sit at the table that is offered by Lady Gratuitousness. The world that is a market is changed by the desire that is founded on the “we”.  And thus the question is: how many people can enter the house where the banquet of gratuitousness is offered?

They may be many and the world as a market will be changing. If it is like that, that would mean that a new desire, a new choice is affirmed and becomes important. This way, the world that is like a market might slowly turn into a world that is like a city. This would mean a world where the desire to belong to an “us”, and to meet one another in the house of gratuitousness, will dominate.
Maybe the time will come where the hardness of the world as a market will no longer rule and where the heart of many people will change when they taste food that is full of peace.

A different world may be borne. Gratuitousness is not imposed, but suggested. It is an invitation and it is a change. It is a power that should flood the earth. For this reason gratuitousness has to be linked to the construction of an inner person, to the spiritual power that should cross the whole world. I hope that the market, which sometimes is a faceless reality, could become a city, similar to the new Jerusalem, where there can be harvested every month (cfr. Apocalyps 22,2). And it is clear that with 12 harvests a year, many banquets can be laid, similar to the one Lady Gratuitousness has prepared for all.