Shoten MINEGISHI at #thecryforpeace: "Solidarity for peace supported by prayer that renounces ego" 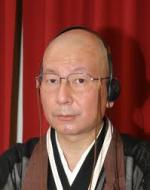 1 The subject of my speech

“Peace is not an idea but a reality,” said the late Dr Tetsu Nakamura, a Japanese medical doctor who devoted his life to medical care and improving people’s lives in Afghanistan.  I am facing the question; can we bring this “peace as a reality” through prayer?

I do not think that anyone, except some people, feels that “peace will come if we only pray.”  But that does not mean that “all we need is action.  I am also aware of the fear and danger of “action without prayer.  “Prayer” is required that can bring about “peace as a reality,” transcending the insufficiencies of both “prayer without action” and “action without prayer.  That is how I perceive the theme of this forum.

Soon after the Russian invasion of Ukraine this February, 18 temples, including my own, in a local area 150 km Northwest of Tokyo, started to gather donations from those who visit our temple by giving “Goshuin”, a card with a red ink stamp in calligraphy, to support Ukrainian refugees.    Seventeen other temples also agreed and placed donation boxes.  We sent the money collected at the 33 temples to Poland because we had a neighbour from there.  With this person as a go-between, we continued to purchase daily necessities in Poland through the Polish county of Schutz and send them to Ukrainian refugees there.

2-2.  What we faced in assisting Ukraine

For an activity in the Japanese countryside, we collected large amounts of donations.  Eventually, the recipient asked us if we could deliver some of the relief supplies to the Ukrainian military.  After some consideration, we decided that we could not do so.  One reason is that we collected the money as a religious activity.  The other reason was that we considered that the Russian soldiers at the end of the line fighting in Ukraine were also victims as human beings.  We judged that they, except a few, were merely engaged in the war by the state’s orders.  The situation in Ukraine inclined our hearts toward there, but we thought that supporting only one side of the soldiers was against the principles of the religion.

In our tradition, there is a saying, “The sun and the moon have no personal feelings of like and dislike,” meaning that both the sun and the moon shine uniformly on all regions without dividing them.  Therefore, we wanted to avoid one side or the other, not to mention the position of the Middle Way in Buddhism.

2-3 The State and the Individual

The following emerged here.  “What is the modern state” which drives human beings as individuals into battle.  Citizens must obey the orders of a state that exists as a nation governed by the rule of law.  However, even if the government were a country ruled by law, there was still a possibility that the state would make a judgment mistake, and the question is what an individual citizen should do in such a case. One option is to follow the orders of the state, while another is to make a choice based on one’s conscience or religious beliefs.  There was even a term for this: “conscientious objection to military service.  However, in the event of total war, history suggests that it would be tough to follow a “conscientious objection” to military service.  Who knows whether one could stick to one’s convictions even if one’s sister or brother were about to be killed?  There is tension between the state having to protect every citizen and each citizen supporting the state.

2-4 The Breadth of the Religious Framework

I would like to call attention to the universality of “actions based on religious beliefs,” which I mentioned earlier.  Explicitly speaking, religion has the property of extending beyond the state’s framework, and that is why the framework is broader than that of the nation.  But at the same time, each religion may or may not be more coercive than the state in its respective character.  Keeping this in mind, I would like to deepen my thoughts with you on the aspect of the desire for peace required by religions that exist beyond the state.

2-5 Anxiety about the word “justice

When I hear the word “justice,” I am cautious in my heart because sometimes the word justice can be a word that aids the tendency to justify an unjust means to an end.  On the Russian side, there is “justice” in marching for the well-being of the Russian population.  On the other hand, the Ukrainian side has the “justice” of defending its land and people.  The battle is going under these two different “justices.  But is justice relative?  I do not think so. However, if absolute “justice” could be brought, wars and destruction in history would have been much less frequent.

Is there a path to reconciliation in war and conflict that does not presume absolute justice?  Though I have mentioned many times in your past gathering, I would like to repeat this.  My spiritual master in a Japanese Zen monastery taught us the “right” in the Chinese character as hieroglyph is expressed as keeping oneness.  At the level of “this one is right, and that one is wrong,” we have not yet reached true rightness.  I learned that “right” is where and when everyone can come together as one.  It would be a mistake to consider this as a compromise without principle.  To be kept one by everyone is a concrete way to bring about “peace as a reality.  What can we do to bring peace here and now, not 30 years from now?  Or what can we do?

3-1 Return to the Prayer of the Founder

Because for prayer to be a source of peace, it will first be necessary for us to go back to the prayers of the “founders” of each religion and reflect on ourselves and our weakness and inclination toward evil within ourselves.  We must then ask ourselves what we, as human beings weaker than reeds, can do to help ourselves.

I think the word “prayer” here could replace “spirituality.”  “Spirituality” is something that lies deep within each of us and yet gives us the power to live beyond each of us.  We make close to spirituality through our prayer, which purifies us in the religious sense, no matter what position we are in or what evil things we have done.  We must reflect on ourselves to see if such a prayer could be born in the place of self.

What can we do for peace?  Or how can we respond to the current cry of Ukraine?  Are we listening to the moans of Ukraine and all over the earth like “Avalokitesvara Bodhisattva”?  We must set these questions front and centre.

Two years ago, the theme of your gathering in Rome was “No one is saved alone,” This is because we live in a way that exists only when there are others.  Therefore, in response to this, last year, I said, “No one is lived alone.”  This word shows us we all live in relationships.  In other words, in Buddhist terms, human beings as individuals can become human beings through “dependent co-arising,” or more simply put, through “solidarity” with all things.

3-4 Solidarity for peace supported by prayer that renounces ego

We are all connected, friend and foe alike, because we are nothing more than beings who cannot live without being connected.  When this interconnectedness is disrupted, everyone is at a disadvantage.  For example, many people are suffering difficulties because of the discrepancy between the supply and demand of energy sources that had supported each other before today’s war in Ukraine.  In other words, “peace as a reality” can only be sustained by the right solidarity.  I am one of the people who think I would be so happy if there were no Russian invasion of Ukraine.  But, if there is thinking it is good that one side wins and the other loses, then there can never be true solidarity, and real peace will never come.  This is the religion’s point of view.

Finally, I would like to emphasize that the pure and right solidarity that brings peace can be supported by pure prayer and spirituality, which goes to the root of the self and makes the ego nothing.  I want to conclude my talk by asking, “Can we share this prayer, spirituality, from the perspective of all humanity, transcending differences in religion and nation?