Christian Unity, Love of the Poor by Munib A. Younan 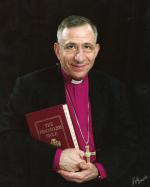