Message of His Holiness Benedict XVI 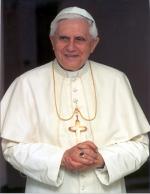 I am particularly glad to convey the heartfelt greetings and appreciation of the Holy Father Benedict XVI to the illustrious Representatives of the Christian Churches and Communities and of the great world Religions, as well as to the people of Sarajevo, whom are particularly dear to Him, and to all those who are gathered to celebrate the 26th International Meeting for Peace organized by the Community of Sant'Egidio.

It gives joy and comfort to see that this pilgrimage of peace, started in Assisi in October 1986 by Blessed John Paul II, continues to bear fruit. The Supreme Pontiff Himself wished to underline its significance last year, 25 years since its beginning, going as a pilgrim to the city of Saint Francis, together with many believers and men and women of good will, who are engaged in a sincere search for truth and are therefore commited to building peace. On that occasion, He observed how the cause of peace is today threatened by a twofold danger: on the one side the exploitation of religion for violent ends, and on the other the rejection of God in the name of a completely secularized vision of man, which in turn is capable of producing boundless violence. The combined effects of these two negative forces were experienced in tragic proportions, also in the city of Sarajevo, during the war that started twenty years ago, waging death and destruction in the Balcans.

As an antidote to this recurrent threat, in Assisi Pope Benedict XVI revived the covenant between people of religion and people engaged in a sincere search for truth, though they do not feel they belong to any religious tradition, convinced as He is that a profound and sincere dialogue may be, for the former an engagement to the ever necessary purification of the religion they profess, and for the latter a way to remain open to the major questions of humanity and to the Mystery that enfolds the life of man.

Therefore, the common pilgrimage towards truth may turn into a shared pilgrimage towards peace. An expression of this are the International Meetings for Peace promoted by the Community of Sant'Egidio. And the meeting this year in Sarajevo bears a special relevance. As the Blessed John Paul II, who felt so profoundly bound to this city, once said: "It cannot be forgotten that Sarajevo has become the symbol of the suffering of the whole of Europe. It was so at the beginning of the 1900s, when the First World War had its beginning here; it was so in a different way this second time, when the conflict took place entirely in this region of yours" (Homily in Sarajevo, 13th April 1997).

Today, from Sarajevo, a message of peace shall rise, thanks to the meeting of many men and women of different religions. Peace needs to be supported by hearts and minds that search for truth, opening up to God's action, stretching out their hands to others. It is important, then, to widen our vision to the whole world and to realities that are problematic in terms of living together, reconciliation and peace, with hope and commitment: the threat of terrorism persists in many parts of the world, many wars shed blood on the earth, violence against one's brother seems to have no end. Our world truly needs peace! From our world a cry rises, stronger and stronger: "May peace come!". The Holy Father's thought in these days goes especially to the Middle East, to the tragic situation in Syria and the Apostolic Journey he will soon carry out in Lebanon. His wish is that these lands, and all lands that are in need of reconciliation and tranquillity, may soon find peace in serene coexistence, in stability and in the respect of human rights.

The long experience of dialogue, developed also through these Meetings, shows how faulty the culture of the clash is, while the value of dialogue is revealed, set on the solid tracks of truth, which peace stems from: "This living together is in fact a precondition that derives from our being human. And it is our duty to give it a positive content. This living together can transform itself into living against one another, it can become hell if we do not learn to accept one another, if everyone only wants to be himself or herself.  But it can also be a gift when we open up to one another, when we give ourselves to one another" (Benedict XVI, Message to the International Meeting for Peace of Munich, 1st September 2011). It is an awareness that must grow in the consciences of men and women and peoples.

"Living Together is the Future"! This vision for us Christians is rooted in faith: "The God in whom we Christians believe is the Creator and Father of all, and from him all people are brothers and sisters and form one single family. For us the Cross of Christ is the sign of the God who put “suffering-with” and “loving-with” in place of force" (Benedict XVI, Speech in Assisi, 27th October 2011).

While conveying His wishes of a fruitful meeting, the Holy Father is united spiritually to all those who are present, in the certainty that the Lord, Father of all men and women, will continue to guide us on the path of peace and peaceful meeting among peoples, blessing our every effort.

I join the wishes of the Supreme Pontiff and avail myself of this occasion to express to You, dear Cardinal, my feelings of consideration and esteem in Christ.