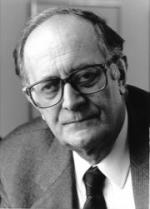 Let me first tell you whom I am. An Italian speaking Swiss lawyer of the University of Zurich, former Swiss Diplomat, first in Classical Bilateral Diplomacy, then in Trade Diplomacy (that has brought me to be an Ambassador for trade agreements and then a State-Secretary for External Economic Relations of Switzerland) and finally in Humanitarian Diplomacy (having been called to preside over the International Committee of the Red Cross, what I did during 13 years). Since the end of the ICRC Presidency, I have been active in Demining, in the field of Human rights in the Middle-East and North-Africa and finally in the former Moral Rearmament, now called Initiatives of Change, of which I am the Honorary Chair. But most important to say is my Friendship with the Community of Sant’Egidio, whom I know since their successful Mozambique Peace negotiations. I participate here in Antwerp the 16th time to an International Encounter Uomini e Religioni .

None of us had witnessed the start (with the Sarajevo assassination, or the declaration of war by Emperor Franz-Joseph to Serbia on 28th July 1914) of WWI . We are however all aware of the horrible consequences of this global armed conflict that brought in four years millions of human beings to death, to severely wounded and mutilated, leaving hundertthousands women as widows and a very high number of orphans. The fighting soldier was at that time not considered as human being: it was a war between States!

As former ICRC President, I may recall that Henry Dunant had already warned 1862 that new technologies threatened to make war more barbaric. This was certainly the case in World War I where inter alia aircrafts, heavy artillery and finally also chemical weapons were used. The prediction of the Red Cross founder remains of actuality at the beginning of the XXIst century

It was on the initiative of the ICRC that the Geneva Protocol on Chemical Weapons was signed 1925, in the frame of the League of Nations. This was followed, 1972 in the UN, by the Chemical Weapons Convention.

It is indeed in particular after World War II that many efforts were made in the field of general balanced and controlled Disarmament but with limited results also because the UN Conference on Disarmament is since years blocked by the rule of consensus that does even prevent to decide on agendas. We must admit that the enormous increase in arms represents a grave threat to stability and peace. The excessive stockpiling or indiscriminate trading in arms cannot be morally justified. Arms can never be treated as other goods exchanged internationally.

Some progress has been made in nuclear non proliferation, even if I have to deplore – because of the catastrophic humanitarian consequences of any use of nuclear weapons – the non explicit inclusion of such arms in International Humanitarian Law, particularly after the end of the Cold War. I am glad to establish that the Red Cross - Red Crescent Movement have now decided on a four years action plan for working towards the banning of nuclear weapons.

We have however to welcome the Biological Weapons Convention signature. Also the conclusion of agreements on explosive remnants of war, on antipersonnel mines and on cluster munitions has to be positively noted, as has too the signature of the arms trade treaty. I call these treaties as humanitarian disarmament. One should at this juncture recall the responsibility of arm producing countries to avoid proliferation of light weapons and small arms among non states combatant groups.

Let us say it with determination, that an enormous responsibility before all of humanity lies on those countries possessing mass destruction weapons. The general trend should be to ban production, sale, importing and exporting, stockpiling and use of all sorts of weapons! But ongoing disarmament requires substantial political engagement as well as human and financial resources and a powerful support by the Almighty, whom we always have to invoke for help.

And let me add that with the agreement on disarmament measures, their application is not always warranted.

On the Town-Hall of my home city, Lugano, there is an inscription saying IN LEGIBUS LIBERTAS; QUID LEGES SINE MORIBUS ET FIDES SINE OPERIBUS ? What I would freely translate FREEDOM IS DETERMINED BY LAWS; BUT WHAT ARE LAWS WITHOUT GOOD GOVERNANCE AND TRUST WITHOUT COMMITMENT?

It is now to you distinguished Colleagues Panellists, to express your views particularly on the question, if disarmament is really possible!