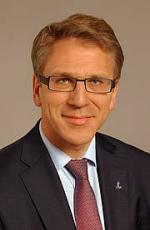 Who will separate us from the love of Christ? Will hardship, or distress, or persecution, or famine, or nakedness, or peril, or sword?  As it is written,
“For your sake we are being killed all day long;
we are accounted as sheep to be slaughtered.”
No, in all these things we are more than conquerors through him who loved us.
Romans 8:35-37

To my brothers and sisters, I greet you in the joy and peace of Christ.

We are gathered here in a year when we commemorate how war could separate humanity, in the fields of this land, in this continent, affecting many parts of the world.  Millions died, even more millions were separated from their dear ones by exactly hardship, distress, persecution, famine, nakedness, peril, sword - and other weapons. Human beings, soldiers and others, suffered - as people always and everywhere do when war is a reality. Some became victims of genocide.

These days we are sharing and are deeply concerned how hardship, violence, terror and war have developed in other parts of the world - and also again in this continent - learning how people who have lived together in one city or one country are now forcefully separated, driven to flee from their own and their neighbours. Some are persecuted for their faith, some even forced to be separated from their faith identity.  We also think of Archbishop Mar Yohanna Gregorios Ibrahim and Archbishop Paul Yazigi and the many who are taken as hostages, separated from their dear ones and their sanctuaries and dioceses by meaningless violence.

My mind goes to the people in South Sudan, where the warlords seek the interests of their own in the name of their tribes and drive ordinary people to be separated and against one another, and therefore to famine and peril. And to Korea where a war not yet ended still separates families and peoples in North and South Korea.  And to the names of places and countries of violence we have heard the whole summer, Israel, Palestine, Gaza, Nigeria,Ukraine, and many others, countries and regions, where people are not living together as neighbours, but in conflicts that have to be solved by political means for justice and peace and not increasing military violence. Or where people are facing how human beings are not in peace with creation, fighting against the effects of climate changes.

Separation and war breed each other.  The power of sin, violence and death divide and separate us as human beings created by God of life to fellowship with one another.

A century ago when this place and this continent was a battlefield, soldiers died and buildings crumbled - so too did many illusions. Many were separated also from their convictions and trust in the progress of humanity, particularly the European values and faith shared here and in other parts of the world.

When World War I finally ended, many  placed any trust that might have survived into treaties and accords among the empires of a new order. The peoples of the world would, indeed, study war no more.

We know that it was not the end. This city and country and peoples were driven into more and sometimes even more brutal violence and even peril.

After the WWI and even more after WWII, world leaders took new initiatives to address and prevent conflicts from a political and diplomatic approach, through establishing multilateral institutions, some of them based in my home city of Geneva.  The World Council of Churches was prepared before but only established after the WWII, to avoid that the churches should be divided by war and conflicts and rather become peacemakers and peace builders, as we are called to be. The story of separation and war had been repeated. Now it was time to confess together that there is something stronger than the powers of separation and war.  "God Unites, the Enemy Divides”, this was one of the themes at the first Assembly of the WCC in Amsterdam 1948.

Among the strongest stories from the First World War, are those of how soldiers could meet and talk across the frontiers and recognise one another as brothers and fellow human beings. Something can be stronger than these separations of war and conflict.

From the life-threatening realities and death-dealing forces of today, many of you come to gather in this community today. Together we have the boldness to lift our hearts and voices to pray for justice and peace for all of God’s creation.  What fuels our motivations?  How do we account for our faith actions here.

Paul as he wrote to the Christian community in Rome, that mighty center of the great empire. Many a Roman citizen placed their trust in the imperial claims that Rome was the center of justice, peace, and power.  All hopes for justice and peace lie there. Paul gives something else. He gives a clear accounting of the motivations and faith to encourage and inspire this faith community, a community, that like himself, was and became later very acquainted with persecution, violence and loss.

Empires - big or small - are temporal. They could and should promote justice and peace. But they also promote their self-interests, often at the expense of the interests and well-being of many of the most vulnerable.  Empires raise and fall. They never have the last word.

God’s righteousness lasts forever. God’s righteousness is not manifested through the power of empires, but through faithfulness to us. It is expressed in t death, resurrection and life of Christ. Everything is said and included in the Cross.  If God could be there, God can be with every human being in any situation.  “He who did not withhold his own Son, but gave him up for all of us, will he not with him also give us everything else?” (Romans 8:32).  So to the questions of who will separate us from the love of Christ, Paul joyfully proclaims: No one or nothing can separate us from the love of God in Christ Jesus. Because it is the love of the crucified and risen Christ.

This is why we can pray like we did in the 10th Assembly of the WCC last year in Busan, Korea:  God of Life, lead us to justice and peace.  From there we have embarked on a pilgrimage of justice and peace. We are called to participate in this life together in the values of the Kingdom of God. And we are together here to be part of the answer, called to show that nothing can separate us from the love of God. God loves even his enemies. Love never ends (1 Cor 13:8).

It is this hope that beckons us to go forward in faith. With all people who are created to life in fellowship, not in separation.