Archbishop of Canterbury and Primate of the Church of England 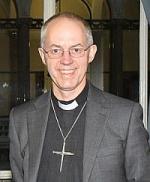 Born in 1956 in London, the Most Revd Justin Welby was educated at Eton College and Trinity College, Cambridge, where he studied history and law. For 11 years - five in Paris and six in London – he worked in the oil industry, becoming group treasurer of a large British exploration and production company. He focused mainly on West African and North Sea projects. During this period he became a lay leader at Holy Trinity, Brompton in London, having been a council member at St Michael’s Church in Paris.

The man he believed to be his biological father, Gavin Welby, was born to German Jewish immigrants who moved to England to escape anti-Semitism in the late 19th century, and integrated quickly. In 2016, Archbishop Justin discovered that his biological father is not Gavin Welby but, in fact, the late Sir Anthony Montague Browne. His British ancestors, on his mother’s side, include several clergymen.

A major influence both on Justin and his wife Caroline was their experience of personal tragedy. In 1983 their seven-month old daughter died in a car crash in France. Six years later in 1989, after sensing a call from God, Archbishop Justin stood down from industry to train for ordination.

He took a theology degree at St John’s College, Durham, in which he focused on ethics – particularly in business. He has since published articles on ethics, international finance and reconciliation. His booklet, ‘Can Companies Sin?’, drawing on his experience in the oil industry, evolved from his dissertation at theological college. He has frequently said that the Roman Catholic approach to Christian social teaching, beginning with the encyclical of Leo XIII's Rerum Novarum, up to Pope Benedict XVI's Caritas Veritate, has greatly influenced his social thinking.

For 20 years, his ministry has blended deep devotion to his parish communities with Church work around the world, especially in areas of conflict.

After being ordained Deacon in 1992, he spent 15 years serving Coventry Diocese. His curacy was at All Saints Chilvers Coton with St Mary the Virgin Astley, in Nuneaton. In 1995 he became Rector of St James, Southam, a small market town in the same Diocese – and also the next year of St Michael and All Angels, Ufton, the neighbouring parish. He helped revive both churches, growing their congregations and launching bereavement and baptism teams, among other things. Between 2000 and 2002 he also chaired an NHS hospital trust in South Warwickshire.

In 2002 he was made a Canon of Coventry Cathedral, where he ran the reconciliation work based there. During this time he worked extensively in the field in Africa and the Middle East. He has a particular interest in Kenya, the DRC and Nigeria, where he was and remains involved in work with groups involved in conflict in the north. In the Niger Delta, he has worked on reconciliation with armed groups. He met with religious and political leaders in Israel and Palestine, and on one trip to Baghdad reopened the Anglican Church shortly after the allied invasion. In 2006 he also took responsibility for Holy Trinity Coventry, the main city centre church, as Priest-in-charge.

He left Coventry five years later, being installed Dean of Liverpool on 8 December 2007, replacing the Right Revd Rupert Hoare. Liverpool Cathedral is the largest cathedral in England. Its local area, Toxteth, is among the most deprived in north-west Europe. During his deanship, he brought the Cathedral into much greater contact with its local community, working with asylum seekers and in partnership with neighbouring churches. The Cathedral also hosted events from a TUC rally to royal services. Over his four years, during which he also continued to work on reconciliation and mediation projects overseas, the Cathedral’s congregation increased significantly.

In 2011, he returned to the place where his journey towards becoming Archbishop began: on 2 June 2011, he was announced as the new Bishop of Durham, taking over from the Right Revd Tom Wright. He was enthroned at Durham Cathedral on 26 November, and drew parallels between Liverpool and Durham – noting both the struggles and the enduring spirit of the two places.

An expert on the politics and history of Kenya and Nigeria, he has lectured on reconciliation at the US State Department. In the summer of 2012, he was asked to join the Parliamentary Commission on Banking Standards.

On 9 November 2012, Justin Welby was announced as the 105th Archbishop of the See of Canterbury. He officially became Archbishop on 4 February 2013, succeeding Dr Rowan Williams who retired at the end of December 2012. The new Archbishop was enthroned at Canterbury Cathedral on 21 March 2013.

His interests include French culture, sailing and politics

He is married to Caroline, who studied Classics at Cambridge, where they met. They have two sons and three daughters.
[September 2016]
Source: archbishopofcanterbury.org