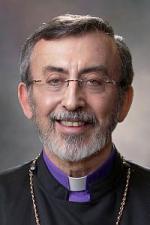 Orthodox Archbishop, Armenian Patriarchate of Etchmiadzin
biography
Reverend Clergy, Distinguished Guests, Friends:
I want to express my gratitude for the opportunity to address this gathering today.  I speak to you today as a lifelong servant of the Armenian Church, who has labored for my people in Europe, the Middle East, America, and our homeland of Armenia.
Concerns about conflict—especially conflict under the cloak of religion—occupy a central place in our public discourse today.  Peaceful co existence among religious groups would undeniably be a positive and productive force in society.  The question we must face is whether such co-existence is possible.  To explore that question, I wish to present the modest example of my own Armenian people.
For more than 1700 years now, Armenians have lived as an explicitly Christian nation.  Among all the world’s peoples, we were the first to have that distinction.  At its best, the Armenian Christian tradition has been tolerant, non-judgmental; welcoming of others and appreciative of their virtues.  It places great emphasis on the responsibility to transmit these values from generation to generation.
At the same time, Armenians have often had to co exist alongside people of other faiths.  These have included Zoroastrians, Muslims, Jews, as well as what I would call the secular or even anti-religious philosophies of Turkish nationalism and Soviet communism.
When we have existed under the rule of non-Christian authorities, the relationship has not always been one of toleration for the Armenian minority.  However, it is a noteworthy fact that my people have fared better, lived more freely and securely, in explicitly religious societies than we have in anti-religious ones.
The latter societies have been calamitous for my people.  But in the former societies—even in situations of delicate relations between religious groups—Christian Armenians, Muslims, Jews, and others have been able to find a modus vivendi—a “way of living together”—which may hold lessons for our pursuit of inter-religious dialogue today.
An important lesson in this regard comes from our ancient history.
In A.D. 449, the Persian king of kings tried to force Zoroastrianism on the Armenians and the other Christian nations of the Caucasus.  This policy led the Christian nations to open rebellion.  The imperial Persian government came to realize, however, that freedom of worship was a basic right it could not deny to her subjects.  It cost the lives of over a thousand Armenian martyrs to secure that right. But in 484 a new king of kings signed a treaty with the Armenians, acknowledging their freedom to practice their faith: one of the world’s earliest examples of a legally-sanctioned “freedom of worship.”
The lesson here is that this simple acknowledgement of a “right to worship”—religious toleration enshrined in law—resulted in an end to war, generations of social stability, and a flourishing of productivity among Armenians that greatly benefitted the Persian empire and its successor regimes.
Another important lesson to be drawn from our history is the role that Armenian clergymen played in promoting peace and friendship between hostile kingdoms with different ethnic origins and religious backgrounds.  History attests to numerous high ranking Armenian clergymen who served as delegates, messengers, or ambassadors of goodwill and peace between the Iranian and Byzantine empires.
The lesson here is that when religious leaders find common ground in shared values, and come together across inter-religious divides, they can intervene in dangerous situations and have real success in averting violence.
As we know, the opposite influence is also possible, where religious leaders incite their followers to violence, escalating conflict against a minority.  Tragically, the Armenians have been on the receiving end of this kind of intolerance.  I will cite only two examples from the 20th century: the Genocide of the Armenians, committed in 1915 by the Ottoman Turks; and the assault against Armenians living in Soviet Azerbaijan and the ethnic enclave of Nagorno-Karabagh, which began in the late 1980s.
In both cases, clerics of the majority population preached against the Armenian Christian minority—lending “religious authority” to violence that was, to a great extent, a secular political policy of state.
In the alliance with secular ideologies and nationalist movements, we see the dark side of religion in public life, where it simply reinforces the worst tendencies of political rulers.  We might draw another lesson from this: That religious bodies have a moral duty to preserve a certain independence from the political arena.
Across the world, religious loyalties are misused to support unholy causes.  However, I feel that this misuse of religion is the result of the influence of modern secularism, which has, sadly, found a haven in some religious institutions.
Clearly, the dismissal of God from human affairs has been the cause of grave calamities of the present and past century.  The restoration of genuine humility before God—along with the fundamental values that flow from such humility—would be the surest way to disengage our world from conflict.
The three principals I have mentioned here—(1) religious toleration enshrined in law; (2) the independence of religious institutions from state control; and (3) the bold, proactive efforts of individual religious leaders—would be ways to nourish the best aspects of mankind’s spiritual aspiration, and restrain potential conflict within societies.
It was in this spirit that the 12th-century Armenian Catholicos St. Nersess the Graceful employed a formula which has been used elsewhere, but which in Armenian translates as this: “Unity in essential matters.  Diversity in secondary matters.  Love over all.”  St. Nersess was addressing the conflicted issues of his day.  But his words also provide a general vision for a “spirit of peace” that can prevail in our own time.
As I have witnessed during my ministry in New York—the world’s most diverse city, but also, by and large, a city of friendship among diverse groups—such a spirit of peace can be initiated on a religious level, based on commonly shared values.
May God help us all to set a proper example to our respective faithful, so that they, too, may turn to dialogue instead of quarrel, to peace instead of conflict.  Thank you.