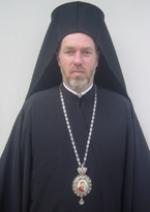 PANEL 5: Christians and Jews in Dialogue: Milestones and New Questions

PANEL 6 : A New Alliance between Humankind and Environment

• Contribution from Athenagoras
IT | FR | EN