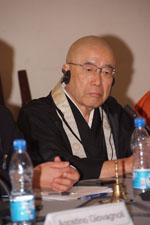 Please allow me to introduce myself. I am Korei Hamanaka, the president of the Tendai Buddhist Denomination, Japan. It is such an honor to be given an opportunity to speak of “Religions in Asia for World without Violence” here today, and I would like to express my hearty appreciation to the Community of Sant’ Egidio, Archbishop of Cracow, and all the people concerned.

The Tendai Buddhist Denomination convened the Religious Summit Meeting on Mt. Hiei, “the Interreligious Gathering of Prayer for World Peace,” inviting world religious leaders, on the 3rd and 4th of August, 1987, inheriting the spirit of the World Day of Prayer for Peace initiated by His Holiness Pope John Paul ? in Assisi. Since then, we have annually held the Religious Summit Meeting on Mt. Hiei , wishing the day of world peace to come true the earliest day through dialogue and mutual-understanding in world religious leaders. It counted the 22nd anniversary last month.

Please let me express our cordial appreciation for the participation of His Eminence Cardinal Jean Louis Tauran, President of Pontifical Council for Interreligious Dialogue in The 22nd Religious Summit Meeting on Mt. Hiei , and also for his speech with precious propositions.

It is now pointed out that there are religions behind terrorism and genocide that throw the world into fear. But, intolerance and self-righteousness should be the real issue here. It is called fundamentalism. The idea of judging others by the “justice” of one’s own limited outlook will never bring world peace.

Faith should not be an act of self-righteousness or exclusiveness. I insist this not because I’m a Buddhist, who regards selflessness as the essential, but also because I believe that each religion needs to respect others, and it is the only way toward a continuing human future and world peace.

We invited the children from a community garden in Bosnia where more than two hundred and fifty people had died from racial opposition, to the 20th Anniversary of the Religious Summit Meeting on Mt. Hiei. In this community garden, Muslims, Serbians, Croatians, who used to resent one another, now live together in peace. The children from the community garden said that they wanted to make friends with people from different countries, of different races or religions, and with different opinions, then to do many fun things together. This is the very valuable proposition to realize a peaceful world without violence.

Humans have repeated brutal activities like wars, racial conflicts, and genocide since the dawn of history. And in the 21st century, we now still choose a chain of violence caused by hatred and revenge, to draw a sharp line between Enemies and Friends, without learning much from these tragedies in the past.

We, who gathered here on the occasion, are going on a pilgrimage to Oswiecim , Województwo slaskie in the South, where human “evil” was conducted. The word “GENOCIDE” is a combination of Greek genos = “race”, and Latin caedes = “to kill”. The word “HOLOCAUST” is made of Greek words, holo = "whole" and kaustos = “burnt”. Linguistic part aside, I recognize Nazi activity as the very “evil.”

In the novel “Nuit et Brouillard” written by Viktor E. Frankl, a psychiatrist who survived through this very concentration camp, it is mentioned that some gave a piece of bread to others, some killed themselves who could not put up with torture, and some shed tears from being touched by beautiful sunset, lamenting over the contrast of their position and the beauty of nature. Frankl told the people who were trying to kill themselves to escape from the pain of torture, or who had lost the hope to live, the following: All humans have Oswiecim concentration camp in their mind. Even though you despair of your life, life never despairs of you.

I see sublime human soul in this expression. This noble spirit will never submit to violence. In either Asia or Europe, I believe that the very spirit that never gives in to violence, and forgets itself to profit others, will be able to build future and world peace.

On the other hand, in this present world, only limited advanced nations enjoy the benefits of rapidly accelerated progress of science. In the shade of the benefits, people suffering in poverty and starvation are being ignored and forgotten. Seeking a comfortable and convenient life too much, environment is being destroyed. Some countries are aiming at nuclear power, which may lead humankind into extinction in an instant. Moreover nuclear proliferation and terrorism with nuclear weapons are regarded with more apprehension now.

We, Japanese people, as the only atomic bomb victims, demand that all countries possessing nuclear weapons dispose them promptly.

With the speech; “to seek the peace and security of a world without nuclear weapons”, U.S. President Mr. Obama showed his resolute attitude in Prague, The Czech republic, to take moral obligation as the only nuclear power to have used a nuclear weapon.

Japanese religious people have resolute conviction to realize a world without nuclear weapons. It is time that people with faith be asked to pursue action for peace. Our justification for existence would be questionable, if we put ourselves out of problem, and keep the stance of bystanders to the end.

Asian religious people regard variety. In Buddhism, we recognize the soul to be Buddha in every single blade of grass or tree. We accept varieties of religions and aim at co-existence, which is a characteristic of Asian religions. By contrast, it seems like self-righteousness and exclusionism in the modern world are threatening world peace.

We do believe in the divine protection of Buddha and God. Not only Asian religions, but also all religions in the world believe world peace to come in the future, in which all people love and help one another. Until that day comes, we want to make a devout effort to bring it about.

Last, I would like to say thank you all for kind attention to my speech.