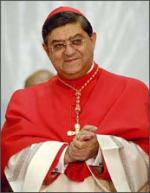 “How good and pleasant it is when brothers live together”, reads the Psalm. This is what we have experienced in these days. Men and women of different religions and cultures have come together for the same reason: to turn in prayer to the God of peace, asking Him for the miracle of unity and the victory of peace over violence and war. Today, at the end of these days, we, Christians, are more aware of what we could have done and did not do, but most of all we are aware of the power and effectiveness of prayer. The Community of Sant'Egidio, which throughout the years has remained faithful to the spirit of Assisi initiated by John Paul II, is witness to the fact that the source of its work is prayer and love for the Word of God. Dear friends of the Community, I would like to thank you for this simple and humble witness, which is essential, for it allows us, too, to share a spirit of genuine brotherhood and unity, overcoming the differences that separate us.

The words Jesus addresses to his astonished disciples who see the withered fig tree seem somehow unrealistic in a society ruled by materialism and by action: "Amen, I say to you, whoever says to this mountain, ‘Be lifted up and thrown into the sea’ and does not doubt in his heart but believes that what he says will happen, it shall be done for him”. For people who believe they are strong and sometimes live opposing others, prayer is a weak strength. Indeed, prayer and humility go hand in hand. Those who recognize their weakness, who know they are in need, pray; those who know they cannot live without God and the others, pray. Lack of prayer is a sign of pride, of self-sufficiency; it is an expression of an individualistic Christianity centred on one’s ego. For this reason prayer and forgiveness are closely intertwined. Whoever prays is also capable of forgiveness, because he knows he is indebted and not in credit, at least in front of the Lord. Forgiveness breaks the chain of injustice and claims, of asserting our reasons against those of others, it helps to see in the other a friend and not an enemy. The forgiveness of prayerful men and women marks the sudden burst of God’s grace that changes hearts, and therefore words and actions. Forgiveness is the way that leads to peace. May the abyss of evil, which we have touched with our hands this morning in Auschwitz, be ad admonishment to us all, not to surrender to the spirit of division and contempt for others.

Sisters and brothers, in this ecumenical prayer we turn to the one God, Father of Jesus Christ, so that our prayer, said with faith, may obtain the miracle of making us all closer to one another, and us Christians closer to humankind as a whole. Men and women of God are needed, who communicate the strength of forgiveness and love to all. The words of Jesus we have listened to today defeat the law of impossibility, which may imprison even our ecclesial realities. “Everything is possible to one who has faith”. We believe it. Therefore we raise our insistent prayer to the Lord, for him to grant us the gift of unity and of peace we long for. May each of us, personally, and all our realities, be a sign of that unity of the human family that was God’s wish for the world since the beginning. O, Lord of Peace, may none of us be a source of division and enmity. Make us all children of your peace, and grant us to keep the spirit of friendship we have intimately experienced during these days alive.